About Andrew
Understated design, often with a geometric influence, thoughtfully chosen woods and attention to detail have been characteristics of Andrew's work since he set up his workshop in 1980. He welcomes commissions for any single item of furniture or room scheme that needs individual and distinctive handling; he has created a diverse body of work ranging from delicate inlaid jewellery boxes to massive oak refectory tables
Website 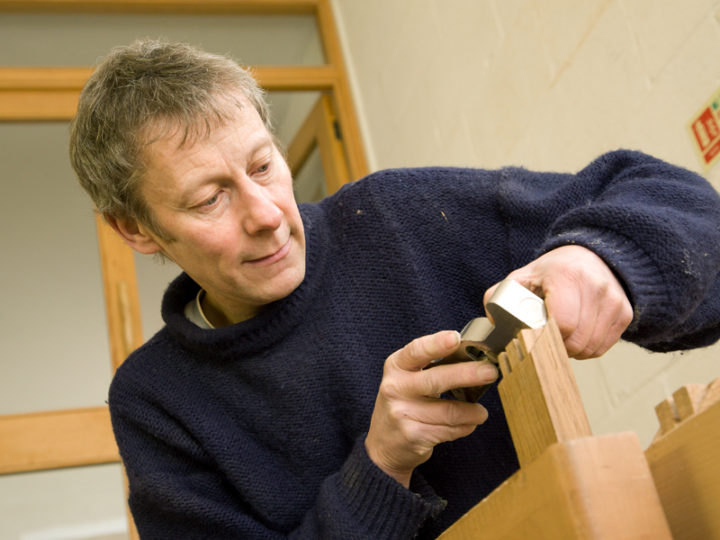 The pioneering work of the 'Cotswold School' of craftsmen, combined with an interest in Art Deco architecture have been strong influences on Andrew's approach to the design and making of fine furniture. His designs have a geometric influence and are often inspired by man made objects rather than the free forms of nature. He aims to create furniture that has its roots in tradition but is fit for how we live today, furniture that embodies the unique qualities that mass produced work can never have, without self consciously striving for novelty in the desire to be different for its own sake.

Andrew had a private training in fine cabinetmaking during the late 1970s. and later studied at Chesterfield College of Art.

His work has been widely exhibited; most notably, various exhibitions organised by the SDC, also, 'A Celebration of Craftsmanship & Design, 'Making the Future' and 'Furniture for the 21st. Century'.

His work appears in several books including 'Bespoke' by Betty Norbury, 'The Complete Woodworkers Companion' by Roger Holmes and 'A Celebration of Excellence' by the Furniture Makers Company.

Clients include the University of Leicester, the TC Harrison group of Companies and Rolls Royce PLC

Away from his own workshop, Andrew has taught at the Center for Furniture Craftsmanship Maine USA, and worked for two short periods for the late Alan Peters OBE