About Edward
Edward is an award-winning furniture designer-maker, creating handmade bespoke furniture in an elegant contemporary style, combining the finest materials together with his skilled craftsmanship. The sensitive combination of classical design with a commitment to exquisite craftsmanship, enables Edward to create pieces which enrich their surroundings and see clients returning time and again. Ranging from luxury jewellery and cufflink boxes to elegant dining, lounge and bedroom furniture, each piece is a celebration of bespoke design and hand craftsmanship.
Website 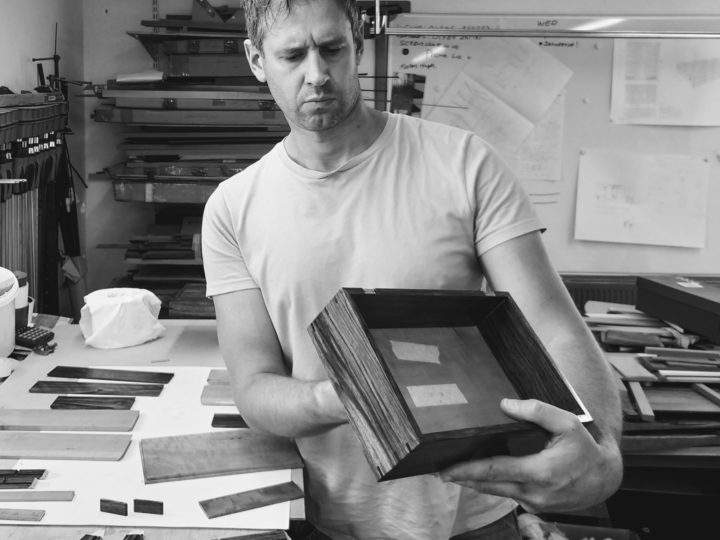 Edward has been continuing the tradition of fine English furniture making from his Devon workshop since 2011. Each piece of furniture he makes is an investment in time, fine materials and skilled craftsmanship.

Edward aims to push his work forward in innovative and exciting ways, keeping an elegant aesthetic, but continually working towards new and interesting pieces. His design interests are broad, from classical proportion, from the ancient Greeks through to early 20 C modernism, classical Scandinavian mid century styling, and the brutalist modernist architecture of the 1950-60s. With these broad influences, his work has developed an elegant gentle feel with strong crisp lines which should sit calmly and comfortably within any space.

Edward likes to work with traditional techniques brought into a more modern aesthetic. His interest in furniture design and quality craftsmanship developed at an early age whilst watching his grandfather in his furniture workshop. He made his first substantial pieces in his early teens and later inherited his grandfathers’ tools which he now uses daily.

His passion for quality craftsmanship extends to the sourcing of interesting and beautiful woods. With a brother in the forestry industry, Edward is able to source rare and interesting timbers, from richly figured English Walnut to creamy white rippled English Holly. He also has a collection of rare and exotic old source timbers, some brought into the country over 60 years ago, which he uses sparingly in his work. Where possible Edward will use timbers which have been sourced sustainably or use more sustainable alternatives including English bog oak as a beautiful alternative to dark timbers.

Edward has developed an international following for his work including his luxury hand made jewellery and cufflink boxes. Edward works almost exclusively to commission, whether designing new bespoke pieces or recreating existing designs from his online gallery and portfolio of work. He also exhibits his work with a number of select galleries throughout the UK

The quality of his work has been strongly recognised with a Certificate of Merit from the Worshipful Company of Furniture Makers for The Speciality Box; and for winning the Wesley Barrell Craft award for furniture in 2014 with The Walnut Hall Table

Edward Trained at the Rowden Atelier fine Furniture School in 2009 where he now teaches part time, passing on his skills and knowledge as a furniture designer-maker to the next generation.