About Fergus
Fergus set up Stoneletters Studio near Oxford in 2003. He specialises in heraldic carving and fine lettering in stone for public and private clients. He is a member of BRAMM, NAMM, Memorials by Artists, The Master Carver's Association and the Society of Heraldic Artists.
Website 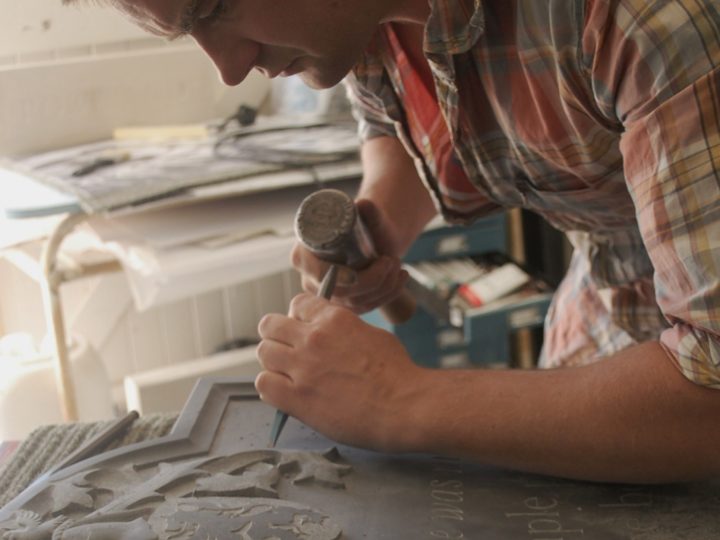 Having grown up playing with type on the floor of the Whittington Press, Fergus has always been surrounded by lettering and good typography stemming from the tradition of Eric Gill.

His work is always evolving, although the principles of good spacing and design are always at the core of his work. He has worked with many architects and institutions in Oxford including the Holywell Music Room which won an Oxford Preservation Trust Award. He also worked with sundial expert Mark Lennox-Boyd on an Egyptian Sundial Obelisk and most recently, a new Canopy of Stars in the paving around the Royal Albert Hall. He also makes fine, hand-carved headstones, and Stoneletters won an award in 2016 for the Best Maker of Hand Carved Headstones in the UK.

Whatever piece he is working on, he strives for perfection. Nothing is hurried and he is not afraid to look back at examples set by past masters and indeed civilisations such as the Egyptians. He prefers classical lettering to the more organic, calligraphic letterforms which tend to dominate lettering today.

He completed his apprenticeship with a merit, and was offered a permanent position.

The Earl of Wemyss & March