About Ferri
Ferri has always been interested in nature and its influence is evident in her work. She is particularly drawn to the human form where she feels the wealth of expression and possibilities are limitless. In her current work which is predominantly sculpture, she is examining how society restricts our lives, demonstrating the boundaries to our freedom. She is exploring this theory through the female form which she feels allows for greater communication of both emotional and physical nuances. She hand builds, and her pieces are finished by burnishing, followed by smoke firing.
Website 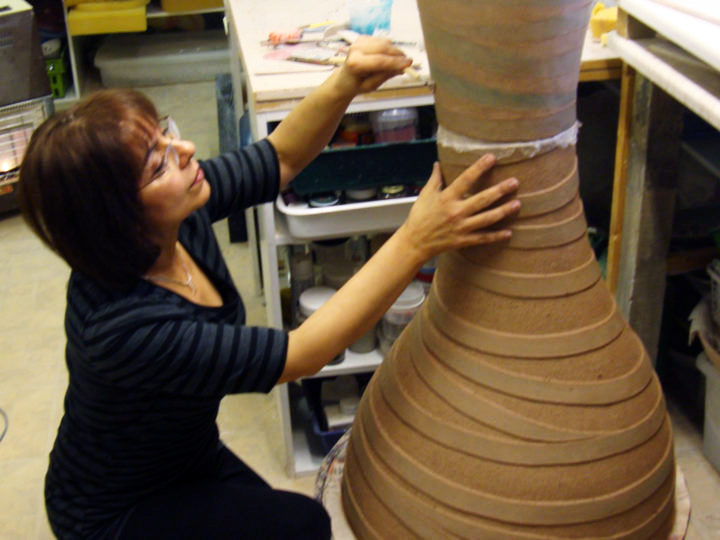 Ferri was born and brought up in Bandar Abbas, a southern region of Iran. Art is an integral and important part of Persian Culture and has always played a big part in her life. This, as well as being part of a very creative and artistic family, shaped her experiences growing up and has helped make her the artist she is today.

Even though the arts were never discouraged in her family, an academic education however is what was expected of her. Hence, she qualified as a primary school teacher. Getting married and starting a family soon followed, which ultimately did not leave much room in her life to pursue what she really wanted to do, which was to create art.

Due to her husband’s work, England became Ferri's second home. Whilst in England, one particular year, something happened which ultimately changed the course of her life. This life changing event was the Iranian revolution. Going back to Iran was not an option; England therefore became Ferri's permanent home.

Once Ferri's children were almost adults she finally decided it was time to pursue her own interests. Having always been drawn to clay, she decided to apply for a course in pottery at Harrow college. Here she was very lucky to be taught by a very well known potter, John Higgins who encouraged her to take her passion for clay to the next level. After achieving her City & Guilds Creative Ceramics, Part One & Two, Ferri applied and was accepted on a degree course at the University of Westminster to study ceramics.

This period of her life was exhilarating; Ferri was finally doing what she had always dreamed of. Here she was taught how to see things laterally and to explore different ways of expressing her thoughts and ideas. In 2006 Ferri attained a BA Hons degree.

Since then Ferri have taken her art form in various directions yet found that it was always influenced by nature and organic forms. Whether she was making vessels or sculptures, the dynamics and even the elegance that can only be found in natural forms has always been evident in her work. The human form, for Ferri is the most beautiful and in her work she aims to show its many facets; from the physical to the emotional and attempt to bring them to life with their own individual personalities.