About Juliette
Our lives are lived through and brightened by the objects with which we surround ourselves and which frame our exchanges with the world, and Juliette uses both these objects’ characters and our interactions with these objects as a starting point for her work. Juliette's work draws on the traditions of silversmithing and still-life to create sculptures that are at once familiar and abstract, re-interpreting the recognisable forms of vessels – bowls, vases or containers - to create ambiguous spaces in which questions about how we relate to the physical world around us can be asked.
Website 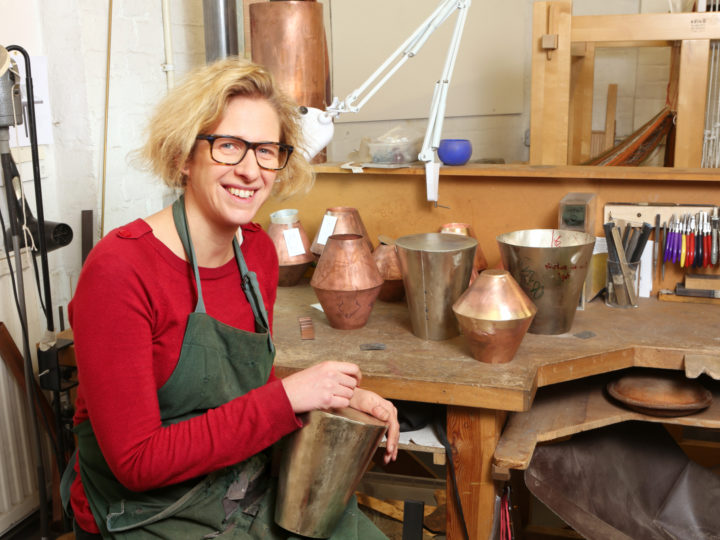 Juliette trained at The Cass School of Art, Architecture and Design gaining BA (First Class) and a research MA (Distinction).

She has exhibited nationally and internationally including Design Miami, ArtGeneve, Tresor Contemporary Craft and Collect. She was selected by the Design Council as one of their Ones to Watch, for potential to contribute to the future of Britain as a design nation. She has been featured in, amongst others, CRAFTS Magazine, Craft and Design Magazine, the Evening Standard and the FT’s How to Spend It. She has work in the Victoria and Albert Museum and the Irish State collection, has received funding from the Arts Council England Grants for the Arts Programme and is a Fellow of the Royal Society of Arts and produced her first publication Material Perspectives in 2018.

Working in base and precious metals, she uses the vessel-form as a canvas on which to explore how we experience our emotional and physical place in the world and how we negotiate the interface between the physical world that surrounds us and the intangible worlds of emotion, belief, thought, language and memory. Focussing particularly on lines, thresholds and liminal spaces, her vessels explore notions of function rather than function itself.

All of Juliette's pieces begin as flat sheets or metal and are unique, or unique pieces from within a series, sometimes taking the form of individual pieces, sometimes as pairs and often as groups that can be arranged and rearranged to create different narratives.

2015: Special Mention, Goldsmiths’ Fair, The Goldsmiths’ Company; Design Council ‘Ones to Watch’ for potential to contribute to British Design;

The Mall, 2014, The Mall Gallery, with Society of Designer Craftsmen, London