About Mayumi
Mayumi weaves with paper yarn. The exciting forms and transparent nature of her woven fabrics is provided by the unique properties of yarn made from Japanese paper. She weaves fabric for interior, fashion, and art form lamps. Using the fabric in conjunction with lights, exciting visual effects can be produced. The fabric is folded deriving from Japanese Origami techniques, creating strength. The resulting faceted shapes produce the variety of light and shadow which she loves. Mayumi dyes the yarn herself, She has exhibited her work in England and in Japan.
Website 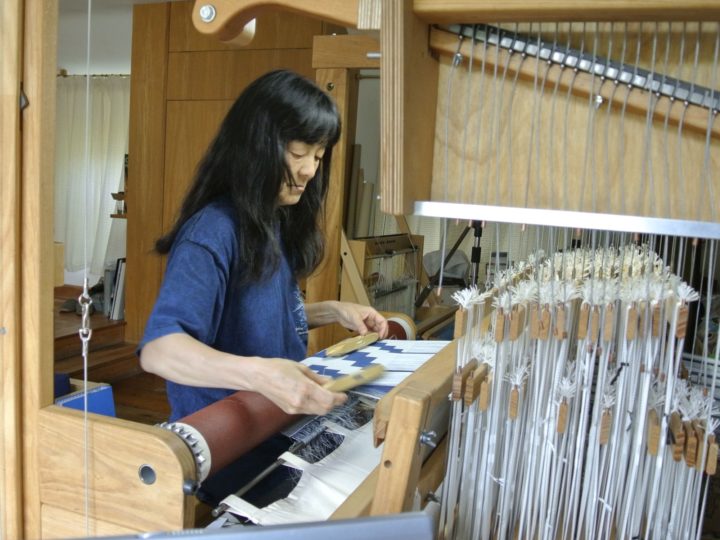 Mayumi is a hand weaver. She has always been developing woven textures and patterns in various yarns to make beautiful and intriguing fabrics. Recently, her main focus has been the exploration of the potential of Japanese paper yarn. The yarn is made from Manila hemp fibres and a Japanese paper making method is used to make it into yarn. It is a very unique, fascinating and sustainable material.

She has been inspired by the AKARI designs of Isamu Noguchi, who has developed Japanese aesthetic conceptions of light and shadow.

The woven paper yarn fabric can be treated like strong paper to fashion and hold a shape. By experimenting with different types of paper yarn, and different weave structures, she has been able to produce fabrics with varying degrees of stiffness and malleability, and with a variety of colours, textures and patterns.

Of the many properties of paper yarn fabric, she has chosen to develop is its capability to be fashioned into sculptural objects. Her lamp coverings show various sculptural forms, both abstract and geometric. Origami folding creates strength and the resulting faceted shapes produce the variety of light and shadow which she loves.

Colours are very important in her work. In Japanese colour book there are many blues, reds, yellows, even greys. To suit her nature and work she dyes her yarn herself.

For Every Cloud Gallery, Langport, 2014

The Association of Guilds of Weavers, Spinners and Dyers National Exhibition, 2014, 2016

The National Centre for Craft and Design, Sleaford, 2016

The Association of Guilds of Weavers, Spinners and Dyers Journal, 2014

The Journal of the British Association of Paper Historians, 2015