About Richard
Richard has been a full time professional woodturner since 2005; he was accepted as a Registered Professional Turner soon afterwards and as a member of the Society of Designer Craftsmen in 2015. He makes one-off pieces, using mainly British native timbers which are characterised by geometrical patterns or by plain but beautiful figuring. His pieces are usually functional though his discus art forms explore the beauty of wood to make purely sculptural work.
Website 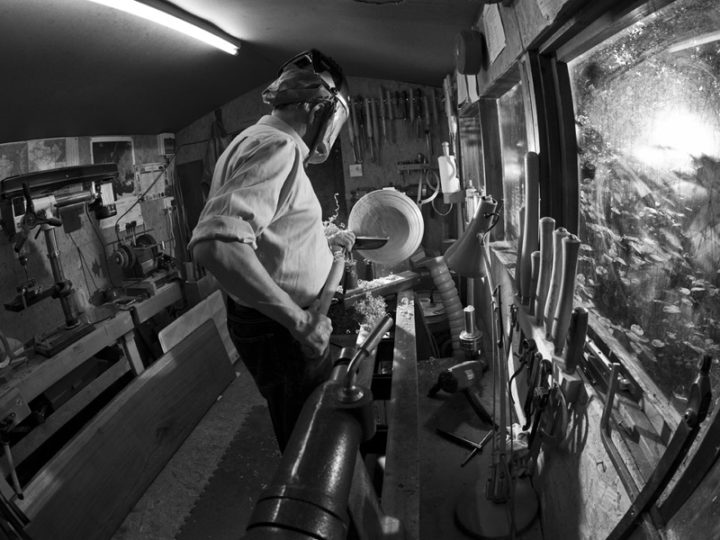 After a career as a chemical engineer Richard changed direction to pursue full-time what had previously been a hobby. Usually using British native timbers, he makes one-off pieces which follow two general directions. If the timber has unusual or beautiful markings eg burr woods (Burls in north America), rippling, quilting, he produces simple flowing forms to highlight the beauty of the wood. However, he also looks for plainer timbers which he can enhance with his signature inlays and veneering.

Most of his output consists of one-off pieces, made sympathetically to the timber which is a highly variable natural material. Functional forms are represented mainly by bowls and platters, but he is one of a few woodturners to make paperweights. These have been developed over time to become simple yet tactile shapes which are small enough to fit in the hand yet, through the metal which is inserted into the centre of each one, is heavy enough to be functional.

Richard's range of functional pieces is complemented by his discus art forms which are usually embellished with his inlays to make work which is purely sculptural.

2015 Accepted as a member of the Society of Designer Craftsmen

2003 Accepted as a member of the Oxfordshire Craft Guild