About Simon
Using his skills as a jeweller and silversmith, Simon creates metal spheres through which he explores his fascination with both the invisible inner world of the spirit and the outer, visible universe. Through this he aims to create objects that can inspire and elevate the viewer.
Website 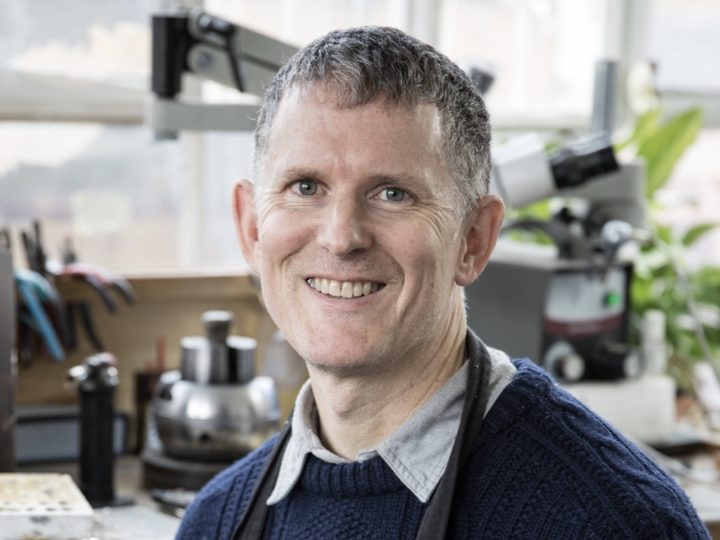 Simon grew up beside the River Thames in the City of London, where he often found treasures hidden in the muddy river bed. His proximity to the city’s old watchmaking district inspired a lifelong fascination with early English watches and their makers.

In contrast, his profound love of the natural world has always drawn him away from the busy city to explore the beauty of the English countryside and its’ ancient monuments.

His work seeks to combine these two opposing realms of the city and nature, of the outer physical and inner spiritual universe. For him the perfect representation of the universe has always been the sphere, with metal providing the necessary precision and enduring brilliance.

Simon created his first collection of precious metal spheres soon after leaving college in 1990. However, demand for his jewellery soon took over and he spent many years creating fine jewellery on Eel Pie Island in west London. Then in 1997 a fire destroyed his entire studio. While he was rebuilding his studio he was introduced to a Tibetan Buddhist teacher with whom he began to study Buddhism. It’s profound understanding of the mind and phenomena quickly becoming central to his life and work.

In 2007 he realised his ambition to live in the countryside, establishing a new workshop in a remote retreat centre in southern France, where he made jewellery for the Buddhist community and restored precious metalwork from the Himalayan region. For over a decade he travelled the world with his teacher, creating jewellery and studying traditional metalworking techniques with artisans in Nepal and Sikkim.

In 2018 he returned to the UK and set up a new studio in London. Here he began work on a collection of precious lockets, which combined his love for old pocket watches and ancient Buddhist amulets. These then created a bridge between his jewellery and sculptural metalwork. He completed his first collection of metal spheres in 2019.

Whilst the world is on currently on hold, Simon is busy working on his second collection of spheres.

1996 - Created wedding rings for the “Bride of the Year Award”

1995 - Designed and made trophy for Kodak’s “Amateur Photographer of the Year” Award.