About Wendy
Wendy is a textile artist employing free machine embroidery and mixed media to create unique one-off pieces of work. Her work is representational, controlled and detailed in style. Occasionally her sense of fun creeps in, usually resulting in quirky or comical cats, birds and bees. After unexpectedly being made redundant, Wendy renewed her interest in sewing and returned to college to develop her skills which in turn led to her love of free machine embroidery. She then went on to achieve an FdA in Stitched Textiles and in 2013 co-founded the exhibiting textile/mixed media group, Visual Marks.
Website 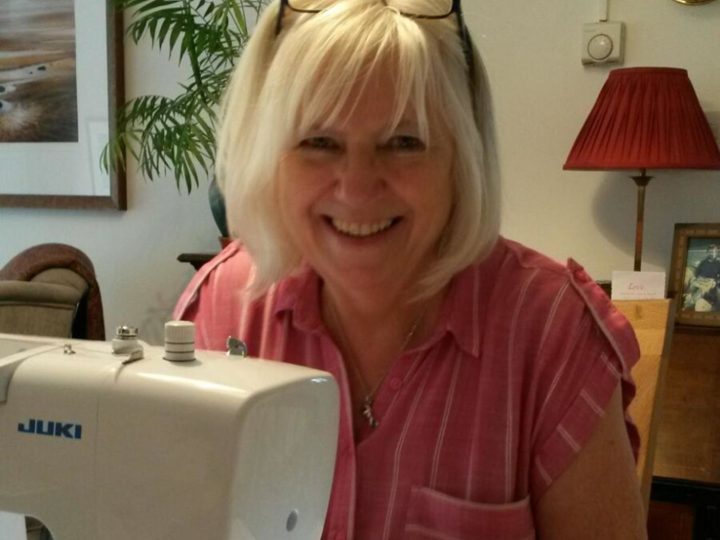 Wendy uses free machine embroidery extensively in her work together with mixed media techniques to interpret her chosen theme. She works on cotton fabric, more often than not using Viscose Rayon embroidery thread to produce detailed work, but introducing other threads such as Cotton, metallic or Lana where appropriate to the subject matter.

Although inspired by the natural world, her work is often triggered simply by a story, a colour, a sketch or a photograph for example, which captures her imagination, prompting extensive research to produce diverse and unusual work.

She is currently considering two environmental issues, the loss of the bees and the global plastic problem.

2018 ‘Passions’ at the Oxmarket Centre of Arts, Chichester

2017 ‘Inspired by the Hillside Chalk figures’ at Andover Museum

2017 ‘Inspired by the Hillside Chalk figures’ at the Oxmarket Centre of Arts, Chichester

2017 ‘A Touch of Red’ at the Oxmarket Centre of Arts, Chichester

2016 ‘Crossing Boundaries’ at the Oxmarket Centre of Arts, Chichester

2016 ‘Fabric – A Celebration of Textiles’ at the Ashcroft Arts Centre, Fareham

2015 ‘Tides of Change’ at the National Needlework Archive, Newbury

2015 ‘ConneXions’ at the Oxmarket Centre of Arts, Chichester

2015 ’25th Designer Crafts at the Mall’ at the Mall Galleries, London

2014 ‘Fabric of the Farm’ at Manor Farm and Country Park, Southampton

2014 ‘Ten out of Six’ at Eastleigh College Graduate Exhibition, Southampton