About Antonia
Antonia from her Suffolk based studio has been producing bespoke stone carvings for many years. Stone has a timeless beauty that can be shaped or left raw depending on the subject matter. Whether it is sculpture or drawings she tries to imbue her work with character, as reflected in the world around her.
Website 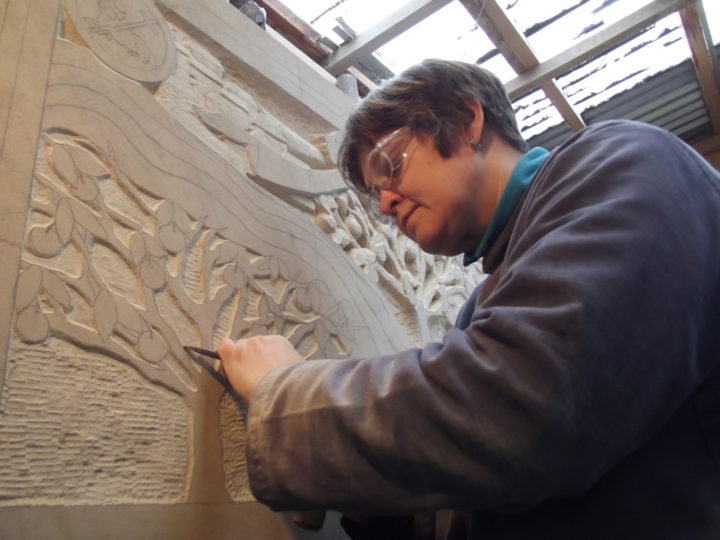 Born in the West Midlands, Antonia had an obsession with drawing from an early age and was certain her future lay in making with her hands, preferably a messy process. Art school introduced many new materials but it was not until she started working at Lincoln Cathedral that her passion for stone really developed.

The Romanesque style of narrative carving has been a great influence and she likes to create characters from observing the quirky world in which we all live.

Antonia uses a direct carving method to keep the work alive and exciting. Working from her sketch book she gives life to the characters within, often using the natural surprises that a raw material like stone can provide.

After initially studying fine art sculpture, Antonia took the offer to train in stone conservation at Lincoln Cathedral. This developed a passion for stone, which took her over to France to work as a conservator on many fine buildings, until the pull of creativity drew her back to England to set up her workshop creating bespoke sculpture.

Antonia has been in business for over twenty years making art for galleries and commissions, both public and private. The other side of her business is the repair of ancient stone sculpture with clients including New College, Oxford and the Victoria and Albert Museum and many parish churches around the country.

Antonia is a member of:

Self-employed as an artist and stone conservator – 1995 - to present