About Moira
Moira is a Textile Artist specialising in unique, handcrafted, felted clothing for women. Her work reflects her love of the sea and the sea shore and her designs are influenced by fashions of past eras. 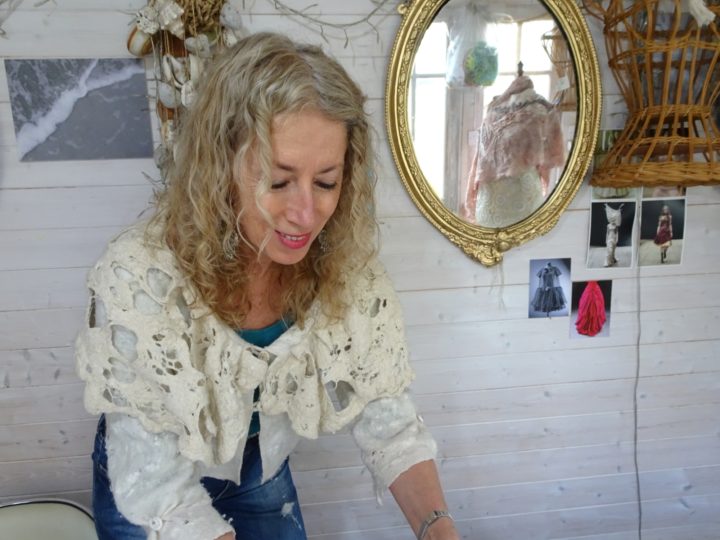 Moira makes unique,handcrafted, felted clothing for women. Her inspiration comes from her love of the sea and shoreline and in particular the coastline of the Outer Hebrides. Her visits there have enabled her to gather a wealth of visual information that gives her endless possiblities in developing her work. Moira also has a passion for fashion and especially enjoys clothing from past eras. These also influence her ideas and in her minds eye she imagines them in cargo being shipwrecked and washed ashore, where they have become weathered and integrated with the shoreline.

Moira employs the technique of felting to create her unique pieces. This involves laying out wool fibres to a pre-designed template. Water and soap are then added and considerable friction which causes the fibres to shrink and mesh together. As well as wool fibres, Moira uses silk, angora, cashmere and plant fibres to add further textural effect. She also uses the technique of Nuno in some pieces whereby fibres are first laid on a backing of fine cloth such as silk before felting and this allows more fluidity in a piece. Colour is also an important element in her work and many pieces are either made using predyed fibres or she will make the whole piece in undyed fibres and then dye to create interesting textural effects. Recently she has begun to explore using natural plant dyes which she is excited to continue to investigate. Moira's initial training in Ceramics has enabled her to make hand crafted 'pebble' buttons for her pieces.

2014/16 'In Motion' A touring exhibiton throughout Europe showing work by 54 international felt artists.

2016 The Fish Slab Gallery, Whitstable 'I do like to be beside the Sea' a joint show with textile artist Diana McKinnon

Member of the Society of Designer Craftsmen

Member of the International Feltmakers Association