About Clara
Clara studied philosophy and aesthetics in Colombia, her country of birth, followed with a course in the History of Art at L'Ecole du Louvre in Paris. She moved to the UK in 1972 and has lived here ever since. She continued to study History of Art and at the same time she started working as a practising artist by attending classes in drawing, painting, ceramics, sculpture, textiles, glass fusion and silk painting. The latter is now her passion to express her feelings particularly about different cultures, architecture and landscape experienced during extensive world-wide travels.
Website 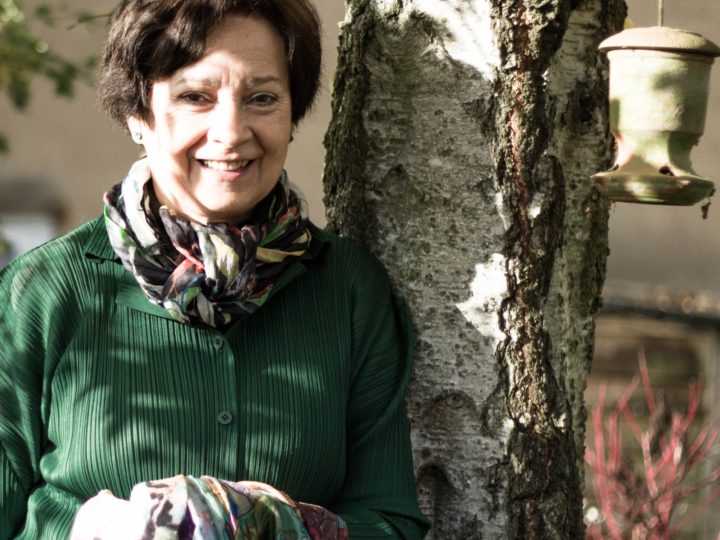 Clara Hancock was born in Colombia, South America. At university, Universidad Javeriana in Bogota, she studied History of Art and she graduated with a Masters in Philosophy having written her thesis on Aesthetics.

Planning to continue studies in France, Clara joined the Banco de la Republica (Colombian Central Bank) in order to earn funds to achieve this ambition and to have access to the extensive collections of pre-Colombian objects and fine arts that belong to the Bank.

In Paris, Clara studied French language and then did a course on History of Art at the L’Ecole du Louvre.

She moved to the UK in 1972 and has lived in London for the last 40 years. In her early years here, and continuing, she was a frequent visitor to the major galleries and museums and attended lectures relevant to what she saw. Clara started the change from academic study of art to become an artist when she became an assistant to a ceramic artist who, for a living, made tandoori ovens for Indian restaurants: Clara constructed ovens to her own height and loved the feel of wet clay! She enrolled in courses to learn techniques of art-making including drawing, painting (in water colour, oil and pastel), sculpture (stone and wood carving and clay modelling), ceramics, lino and wood block printing, silkscreen printing, glass fusion and painting on silk. Silk painting is now her passion. Some of these techniques, learned in a different context are used by Clara in her work on silk, including drawing, water colour painting (using dyes), lino and wood block printing and silkscreen printing. She continues to do some works in sculpture, ceramics and glass fusion and is experimenting in combining her work on silk with her sculptures, ceramics and glass objects.

The designs and colours in Clara’s work on silk are influenced by her long-term academic studies of History of Art and of aesthetics. In her work she expresses her feelings from activities in her life, including what she sees when visiting art galleries and museums and sights on walks and music at concerts. However, the primary source of her inspiration comes from long-distance journeys usually lasting about 4 weeks and planned by her to be undertaken by herself and husband alone exploring themes of peoples’ cultural differences and history. These journeys have included three regions of Australia, all different and separated by thousands of miles of desert; crossing China from East coast to Western border by trains roughly following and stopping at towns on the old “Silk Route” and continuing through Uzbekistan; continuing along a branch of the Silk Route in Russia, including Siberia, and Mongolia; the Rajasthan area of India and into Nepal; Southern Africa through Botswana and South Africa; North America, travelling by trains in an area between Washington D.C. , Philadelphia, New York, Boston and Montreal and Chicago; and many trips back to Colombia and most countries of South and Central America. Clara’s emotions and feelings, memories of patterns and colours from all these trips have been expressed on her silks.

Clara’s interest in cultural diversity led her to frequent visits to the British Museum and she is now a volunteer guide for the Museum delivering talks in the Enlightenment, Egyptian, Mexican and Japanese Galleries and a Highlights Tour of the whole Museum. Her knowledge from these talks contributes to her journeying and to her silks.

1972-1973 London. Evening Classes at various Institutions and Galleries on History of Art

2007 – 2016 Mall Galleries, London. Participation in annual Exhibitions curated by Society of Designer Craftsmen of works of its members

2013 Chelsea Old Town Hall. Participation in Exhibition curated by Society of Designer Craftsmen of works of its members

2018 Chelsea Old Town Hall, London. Participation in Exhibition curated by Society of Designer Craftsmen of works of its members