About Sally
Sally Weatherill has always been passionate about art and textiles and studied both art history and printed/woven textiles in the US before moving to the UK. Here she set up a studio in a picturesque village on the Suffolk/Essex border where she now designs and produces woven fabrics for fashion and interior accessories. She uses both 16 and 24 shaft dobby looms to create each piece individually ensuring great attention to detail and the highest quality. 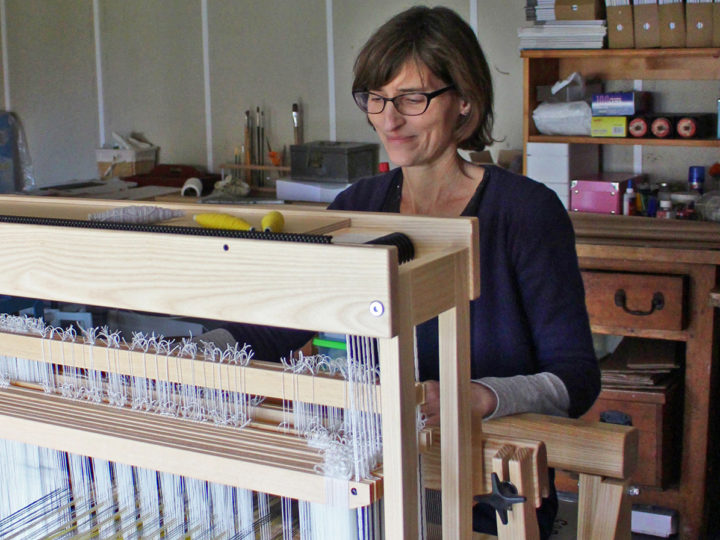 As long as she can remember, Sally has always loved colour and pattern. Early years were spent in a modern house with floor to ceiling windows that brought the outside in – all the colours of the garden and lots of light. These same windows also provided interest at night when they were hidden behind vast curtains in bold 60’s designs.

As an undergraduate Sally studied history of art and creative writing, studies that have had a lasting influence on her and underpin all of her creative work. However, it was not until Sally went back to college to study textiles that she was finally able to indulge her love of colour and pattern.

Sally studied both printed and constructed textiles at CCA in Oakland, CA and has now been weaving for twelve years after initially focussing on printed textiles (particularly devore velvet). She weaves everything herself on either a 16 or 24 harness mechanical dobby loom which gives her the freedom to produce a large range of different designs in small quantities. Recently she has been experimenting with the technique of deflected double weave which allows the threads to break from the rigid weaving grid to create exciting and often unexpected patterns.

Sally’s bold, colourful and textured fabrics reflect both her past and present interests. She is drawn to bold interlocking patterns - reminiscent of printed designs - and is intrigued by those that create a sense of movement. Sally takes inspiration from art history and from the photographs she takes on her weekly commute to London and on walks through the fields of Essex. She likes the idea that her fabrics tell a visual story of her journeys – both figuratively and literally.