About Tori
Tori McLean is an internationally award-winning Artisan · Designer · Printmaker and member of the prestigious Society of Designer Craftsmen. Specialising in printmaking for surface design, Tori creates handmade interior and fashion products in bold and joyful colours. Each design is lovingly created in Tori's Winchester studio as limited-edition pieces, ensuring her customers receive something just that little bit extra special and unlikely to be owned by anyone else. When not creating her own designs, Tori works as a freelance textile and surface pattern designer.
Website 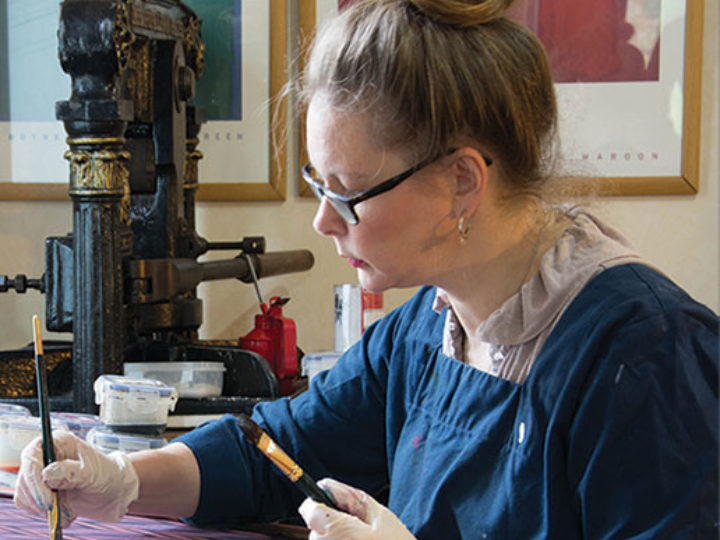 Tori McLean is passionate about printmaking in all its forms, be it on fabric, paper or any other surface to which print can be applied. Each piece is lovingly designed by Tori in her Winchester based studio and printed by hand in the workshop. Full of life and colour, she aims to create beautiful and uplifting products that bring joy to the lives of others.

At the heart of the business is a desire to maintain traditional printmaking skills and quality workmanship. Her paper prints are produced using a stunning Albion press from 1908, a Rochat etching press or a Mahler hand-printing bench. Her fabric prints are made using traditional screen-printing methods on a 3m textile table which is her pride and joy. The results are beautifully crafted products produced in limited editions or colourways, providing the consumer with greater exclusivity.

Tori’s commitment to quality materials and craftsmanship were recognised by the Society of Designer Craftsmen Award 2015 and election as a full member to the Society. Her contemporary and appealing designs have won multiple awards for both fashion and interiors including the International grand-prize at DesignNext® New York and the textile category for the B&Q/Elle Decoration British Talent Search.

Her work is regularly sought for exhibitions, collaborations, commissions and freelance design work. In 2017 Hampshire Culture Trust commissioned Tori to create six Arts & Crafts designs based on Heywood Sumner's Chace Tapestry, in 2016 the British Museum commissioned hand-printed London cityscape scarves for their Grenville Collection and in 2014 she was commissioned to design tree wraps for Helen Elks-Smith’s award-winning garden at the Chelsea Flower Show.

Her deep sense of curiosity translates into an extremely varied portfolio of designs, always linked by her lively use of colour. Often inspired by what she unearths in museum archives, Tori combines her drawings and paintings with print-making techniques, such as woodcut, linocuts, etching, drypoint, solar-plate, card cuts and collagraph, to create carefully crafted repeat or placement prints that delight the eye.

2018 Hand of the Maker - Society of Designer Craftsmen, Chelsea School of Arts, London

2015/18 MSDC - Member of the Society of Designer Craftsmen