About Christine
The creation of visual effects through movement (and the illusion of movement) is fundamental in Christine’s work. The repetition of lines and the interplay of light, line and space create the illusion of another set of lines and patterns. This is particularly apparent when the viewer changes position in relation to the object or when the piece itself incorporates movement. Christine’s kinetic pieces allow the wearer to engage with and control the moiré patterns inherent in these optical pieces and to experience a tactile, reassuring feeling of familiarity.
Website 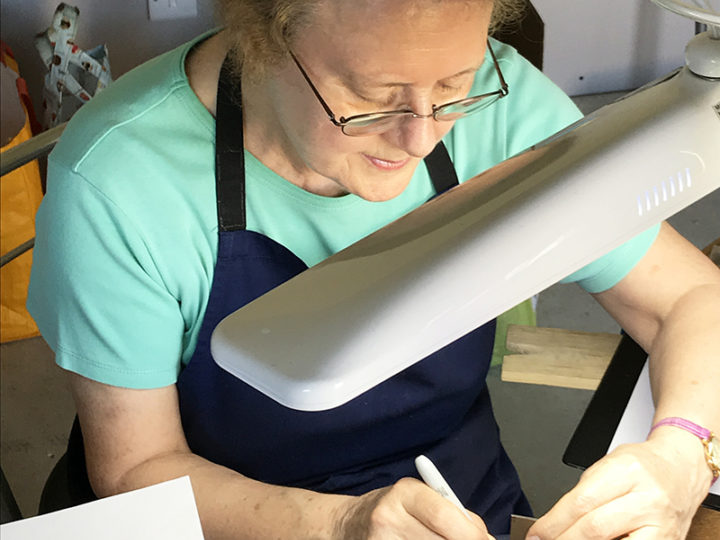 Christine completed her MA in Jewellery at the University for the Creative Arts, Farnham in September 2016. She then spent a year as Artist-in-Residence at UCA until 30 September 2017. She has taught jewellery in Surrey and Hampshire for four years and leads regular workshops at the Farnham Maltings.

Christine loves repetition and pattern and the interplay of light line and shadow. She is interested in optical illusion and in creating visual effects within her work, using the effect of interference patterns to incorporate Moiré fringes. Many of her pieces are kinetic, allowing the wearer to control the effect and to change the appearance of the patterns each time the piece is worn.

Christine’s work is entirely made by hand and each piece is unique.

Her work has been exhibited in the UK and USA

Awards
July 2018 - The Society of Designer Craftsmen Prize for excellence in the work of a Licentiate of the Society.

Commissions
July 2018 – Juniper-Bubble Beaker, commissioned by the Goldsmiths’ Centre as a gin-tasting beaker for the Made for the Table Selling Showcase, 13 July – 31 August 2018

Professional Memberships
Member of the Association for Contemporary Jewellery (ACJ)

Member of the Guild of Enamellers (GoE)

Member of the Society of North American Goldsmiths (SNAG)