About Jeanne
Jeanne works in precious metals using fine wires, stones and enamels. Through her long career she has been inspired by many things, her design work taking her in diverse directions, including natural forms, the paintings of Gustav Klimt and Yemeni architectural detail. Alongside her studio practice Jeanne was Head of the Jewellery Department at Portsmouth College of Art, Chair of SD-C (1976 - 1979), Chair of The Designer Jewellers Group twice, is a Freeman of the Goldsmiths Company and of the City of London, a Fellow of the Royal Society of Arts and Author of 'Enamelling on Precious Metals'. 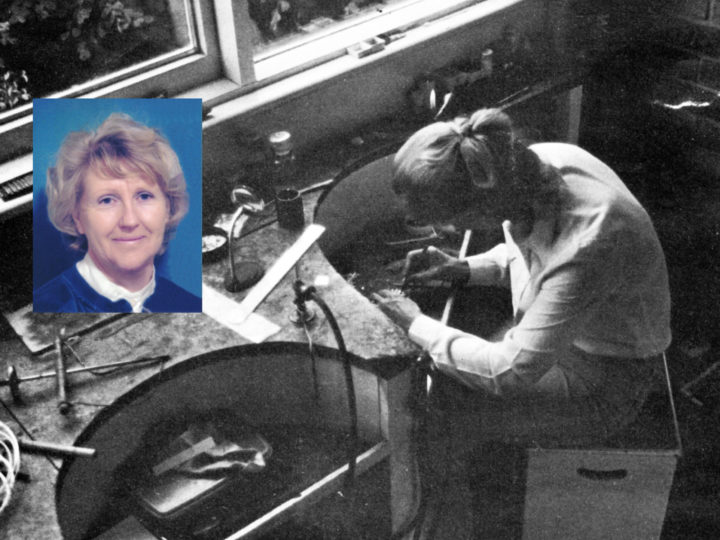 Jeanne trained at Leeds College of Art and was one of only three students in the country to specialise in Jewellery for her NDD. After qualifying in 1952 she worked as the stage jeweller for the Royal Opera House making headdresses for the Ballet and Opera until 1956, while continuing to develop her precious jewellery skills at Central St Martins College of Art. Moving to Hampshire Jeanne set up the Jewellery department at Portsmouth College of Art in 1960 developing it from an adult education class to a full time HND, running the course until she retired in 1990.
She was elected a Fellow of the Society of Designer Craftsmen, and also a Fellow of the Royal Society of Arts in 1972. She was made a Freeman of the Goldsmiths’ company and of The City of London in 1986 and was also elected as a brother to the Art Workers Guild. She was one of the first Jewellers to be selected when the Crafts Council set up the index of makers and sat on the special projects committee. She was also invited to sit on selection committees for The Design Council and The Royal Society of Arts which she undertook with enthusiasm for many years.

Jeanne has always been a pioneer in the history of British studio jewellery and as well as exhibiting internationally has also made many pieces to commission. From prestigious pieces like the casket made for Portsmouth City Council to present the Freedom of the City to round the world sailor Sir Alec Rose and The Portsmouth University Mace commissioned by Hampshire County Council to many special pieces for private clients.

Jeanne has always been interested in pieces having multiple functions and has made wedding headdresses that can be subsequently worn as necklaces and bracelets. Earrings that can be separated into sections, enabling them to be worn as studs, short pendant or long pendant earrings. She made a series of silver boxes that contain rings or earrings, with decorative tops that can be unscrewed and worn as brooches or pendants. Her statement necklaces that could be worn as different length sections or to full waist length were particularly eye catching.

Always interested in new materials, Jeanne carried out practical research into 1715 Hardenable silver alloy produced by Johnson Matthey. This research has led to her being represented in the V&A permanent collection with a brooch made in this unique material.
She was the first person in this country to work with ‘Precious Metal Clay’ researching its properties for the production team and she published her book ’Enamelling on Precious metals’ in 2002 which has sold widely across the world.

Jeanne was pivotal in the setting up of the Designer Jewellers Group, which began as a group of SDC members who were invited to exhibit at London fashion week in 1976 and exhibited with them regularly nationally and internationally and particularly at The Barbican Arts Centre from 1984 – 2016. She organised the DJG 20th Anniversary exhibition at Goldsmiths Hall in 1994.

Today, Jeanne continues to make work from her studio at home and to exhibit whenever opportunities arise. Many of her pieces are in private collections nationally and internationally and most of her work is directly commissioned. All Jeanne's pieces are one-offs and are never repeated.

Group exhibitions with the Society of British Enamellers: