About Anne
Anne draws inspiration for her stunning jewellery from a variety of ancient influences. This can be seen in the way she combines semi-precious stones, beads and silver that has been intricately etched with a myriad of different patterns, to create strikingly original jewellery that is not only unique, but eminently wearable. She is widely collected.
Website 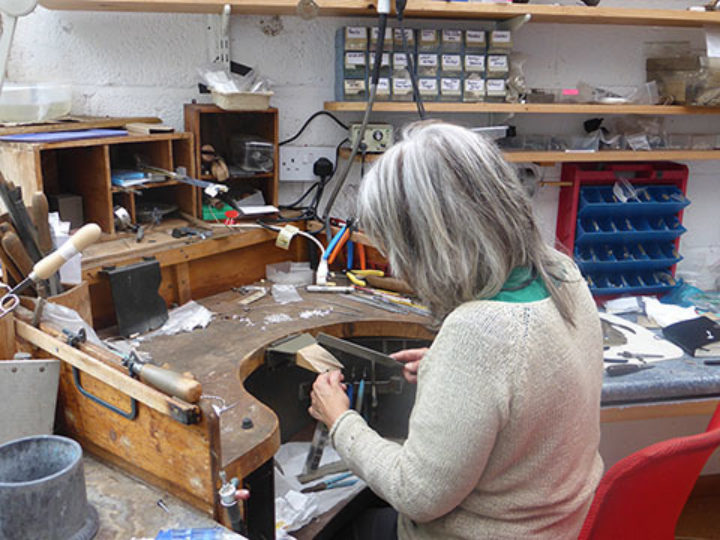 Anne has been designing and making jewellery for over 35 years and in the process of mastering jewellery techniques and artistic expression she has always tried to bring an aesthetic sensibility to all of her jewellery.

The starting point for her work is both conscious and unconscious. Knowingly, she draws upon her eclectic heritage, growing up with an Egyptian father and a Swedish mother. She has also been inspired and continues to be so by a lifetime of traveling to near and far flung places like Asia, North Africa and Greece

More unconsciously, she finds herself drawn towards and inspired by all sorts of decorative detail found in art, books and museums, the architectural embellishments found on churches and mosques as well as tiny intricacies found in the natural world. This creative process never ceases and she continues to sketch on paper and ipad at every stage of her work. From this point, she begins the design process considering aspects of aestheticism, interpretation and use of materials. It is a continuous and fluid process between designer and maker where her intuition guides her creativity, enabling the piece to evolve and even change during the process. The final piece is respectful of both the design process and the materials within which she works.

The “Windows” series is one of her most recent design innovations stemming from a carte blanche commission to design and make a necklace from a bag of gemstones which the collector had obtained from his travels around the world. It was no easy task, given that the stones were so varied in both shape and colour, but she persevered, and eventually, she found a way to marry them together to make a perfectly harmonised necklace which in turn, set her off in an interesting direction.

This began a new creative journey where the process of etching and stone mounting are being explored and elaborated upon. This is most notable in the “Cabochon Window Necklace” where the stones are chevron set in from the back enabling her to create a decorative and solid frame at the front which tends to give the finished pieces the look of Arabic windows, an illusion she likes to think gives her work a rare and unique appearance.