About Fleur
Fleur is a traditional designer-maker of woven textiles, who seeks fluidity and rhythm of design in her use of colour, texture and pattern. Fleur’s inspiration is often drawn from nature, such as the dramatic colours of sunsets and the vibrant and subtle effects created by light and shadow. Her preference is the use of fine, natural yarns which she hand-dyes herself to produce unique and beautiful fabrics.
Website 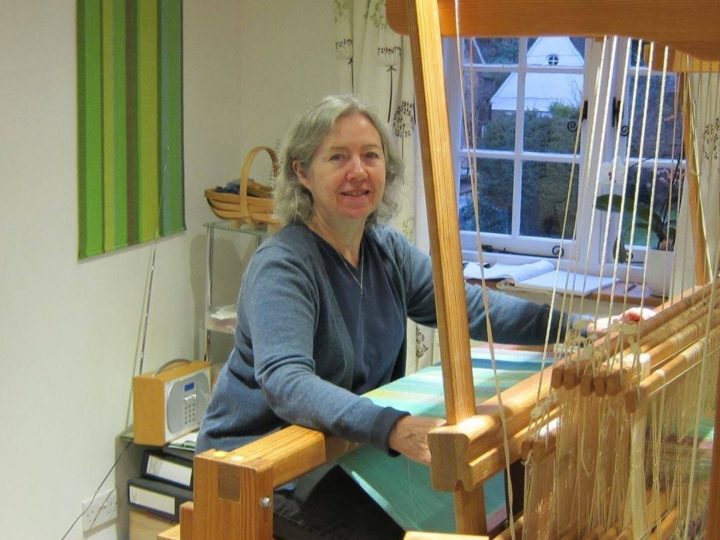 Fleur has been a potter for many years but reached a point in her creative life where she felt the need to expand her horizons and explore other possibilities for her artistic endeavours. This proved the catalyst for her to embark on a foundation course at University College for the Creative Arts (now University for the Creative Arts) in Farnham Surrey, where she had the opportunity to study and work in various new mediums, including print and textiles, and inspired her to pursue an entirely new artistic direction focussing on textiles. She continued her studies at Farnham after completing the foundation course, and graduated three years later with an honours degree in textile design specialising in weave.

The limitless, subtle colours and moods of nature and light have always been a source of great inspiration for Fleur, both in her life as a ceramicist and in her later work with textiles. The tactile quality of the raw material used in ceramics has within it the potential of fusing functionality with craft. This quality is also found in textiles, which has allowed Fleur to experiment in a more fluid form and to develop her creativity in entirely new directions. Fleur favours the use of fine natural yarns, including silk, merino, cotton and bamboo, most of which she hand-dyes. She delights in producing original, individual fine quality articles, including abstract wall hangings, curtain fabric and cushions, and items that may be worn such as capes, shawls and scarves. Fleur's aim is always is to create exceptional and unique pieces of artwork through her weaving.

May 2007 - Graduate Exhibition, University College for the Creative Arts, Farnham.

May 2012 - London: a celebration, gallery@Oxo Gallery, London, with Handmade in Britain

June 2016 - The Maker’s Art, Guildford House Gallery, Guildford with the North Surrey Group of the Society of Designer Craftsmen

September 2017 - A Touch of Silk. Whitchurch Silk Mill in Hampshire comprising work from the members of the south east group of the Spinners, Weavers and Dyers Guild.

September, 2017 - The Makers’ Art 2017 with the North Surrey Group of the Society of Designer Craftsmen, Cranleigh Arts Centre

July 2018 - Hand of the Maker with the Society of Designer Craftsmen, Chelsea College of Art

May - June 2019 - Awakening, an exhibition of artists inspired by the natural world and the arrival of spring. Leith Hill Place, National Trust near Dorking.

Summer 2009 - Article in The Journal for Weavers, Spinners and Dyers

November 2011 - Included in the book Handmade in Britain edited by Piyush Suri published by Vivays Publishing.