About Jan
Jan, an award winning and collectable artist, works predominately in hand woven and hand dyed art textiles. Her work is hand woven or sampled on a traditional 32 shaft dobby loom in her Nottinghamshire studio. Collections of work are based on considered themes, thoroughly researched, using sketchbooks, photography and woven sampling. Abiding inspirations are surface qualities, translucency and reflections. Although Jacquard weaving has enriched her practice since gaining an MA in Fashion and Textiles in 2016, Jan remains passionate about process and making work embedded with the makers hand.
Website 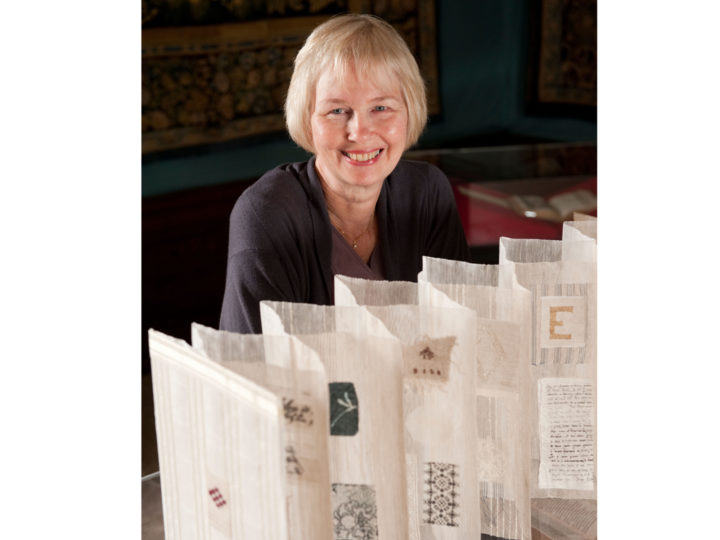 Jan worked as a midwife before graduating from Loughborough University in 2002 with a BA in Textile Design. She completed her MA in Fashion and Textiles in 2016, gaining a distinction and winning the Dean’s overall prize for Textiles in her year. She has maintained her own business since 2003, when she was also selected as a member of the Crafts Council two- year Next Move Scheme. Since graduating in 2002, recognition of her work has become widespread both regionally and nationally. She has been awarded Arts Council England grants and a Crafts Council award and has become a selected member of the Society of Designer Craftsmen and a Fellow of Design Nation. She works on a traditional loom from her studio, in Nottinghamshire, England. Jan produces intricate textiles for use in architectural and interior spaces

Jan uses combinations of silk, monofilament, metallic thread, and wool and cotton yarns when weaving the multiple layers that are her most notable trademark. She utilises heritage British yarns in her weaving, thus building sustainability into her practice. She introduces printing, dyeing and unusual objects as appropriate to the considered themes of her limited edition and one off pieces in an effort to push the boundaries of woven textiles. Her colour palette consists of soft shadowy neutral colours to create a quiet atmosphere. She is particularly interested in the nature of light, texture and surface qualities.

Jan’s inspiration is diverse. Her work would appear to have become deliberately eclectic since her more substantial Jacquard woven MA work now sits alongside the sheer, fragile hand woven textiles that are her hallmark. These styles seemingly speak of the work of two different weavers. However, Jan remains unapologetic about the diversity of her work and enthusiastically accepts these differences. She embraces a broader spectrum of work whose roots emanate from the same commitment to the uniqueness of slow textiles and the hand made. Both Jacquard and hand woven languages are similar but what makes the difference is the weaver’s intention. Jacquard weaving can be about the replication of a design by manufacturing but by using the Jacquard loom to weave a limited amount of a design or by combining further process with Jacquard loom cloth, something new is created. The MA time was highly beneficial. Learning to use the Jacquard loom opened up opportunities for lateral thinking that weren’t possible before.

05/2016 Awarded the Dean's Purchase Prize for Textiles, University of Derby

03/2016 Master of Arts, Fashion and Textiles with Distinction, University of Derby

03/2006 Selected for a Research Mission to Japan; Arts Council, Design Factory, and the Department of Trade and Industry

07/2009 The Space Between, National Centre for Craft &Design,Sleaford