About Joanna
From the age of 18, Joanna focused exclusively on her sport of rowing, achieving elite status, and representing GB & England. At the same time she worked as an archaeologist and then a landscape architect. After retiring from competing, Joanna's focus turned to a need to be creative, and ultimately a designer maker using glass. This led to a return to university to study glass part time at BA and then an MA, graduating in 2015. Joanna now specialises in casting glass in her Surrey Studio where she makes work influenced by her experiences, which is sold in galleries across the UK.
Website 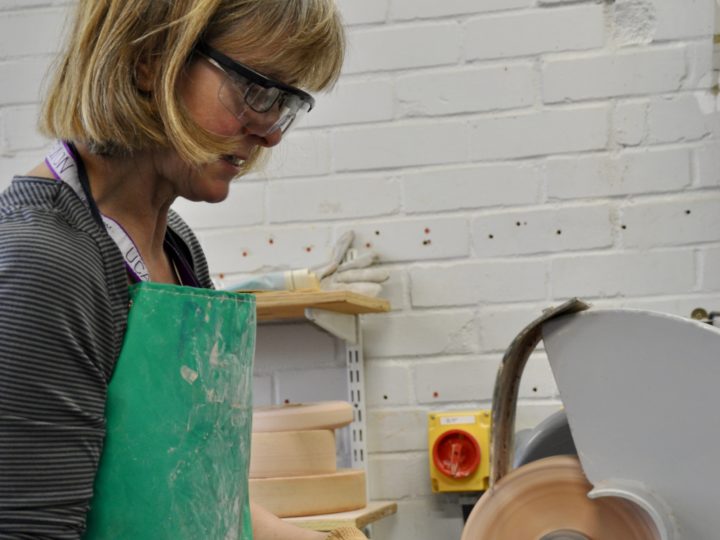 Joanna specialises in cast glass sculptural work. Her earlier experiences, in archaeology and landscape design, heavily influence her glass work. During her MA and subsequent residency at the University for the Creative Arts, Joanna began developing her "Vestigium Series" of glass - after bereavement. This concept reflects the idea that we all leave "a trace, a memory". The work is complex, cast multi-layered with veiled artefacts within and surface textures cast from archaeological excavations. Glass techniques & skills include: fusing, multi-casting, flame working, sandblasting, cold working & polishing. The "Vestigium Series" is still an evolving body of work.

Joanna's more commercial work includes thick cast glass panels using plant material and beach-combing finds, which are made through a number of casting & moulding processes. The processes ensure that nature's extraordinary details are evident in the final glass work.

Artist in Residence, Glass. University for the Creative Arts, Farnham. 2016-17.

Highlights from New Designers 2013, 1st-30th November 2013. Online exhibition on the website of the Contemporary Glass Society. My work received a "Highly Commended" from the CGS at New Designers.