About Deborah
Deborah has over 20 years experience specialising in glass casting and has become renowned for creating beautiful glass sculptures and bowls. Deborah's glass reflects an absorption with the material to create pieces with a strong sense of place, concept or refined beauty.
Website 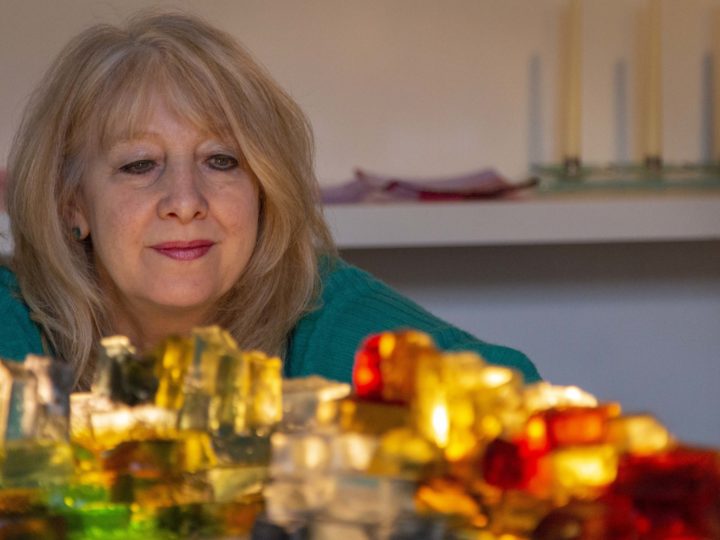 Deborah’s journey to glass, like many other artists, has followed a circuitous route. Her first career was in tourism and catering – working in hotels; managing the catering department at the Guardian Newspaper; running a wine bar. But bubbling under the surface was a desire ‘to make things’ and an evening class in stained glass was the trigger for a major life change resulting in a degree in Glass and Ceramics at Middlesex University.

That was 20 years ago. Now Deborah has become renowned for creating beautiful glass sculptures and bowls. She has shown in Germany, Belgium, Switzerland and Lithuania as well as prestigious exhibitions in the UK such as the British Glass Biennale.

Deborah has a workshop on the Borde Hill House and Gardens Estate just north of Haywards Heath in West Sussex. It's a rural location in a converted stable, a place very conducive to thinking and working creatively.

Deborah creates three distinctive bodies of work each of which she has been developing over several years.

First the ‘Constructed wall’ series which explore the beauty of cairns, harbour walls, dry stone walling and rocky outcrops. The compositions are evocative of the landscape and suggest rocks and stones placed harmoniously together, contrasting defined edges with the softness of adjacent vegetation. The blocks of colour echo the surrounding landscape and sky. They have a sense of place and atmosphere.

Deborah also creates elegantly textured cast glass bowls. 23.5ct gold is fired into the glass and sets off the jewel like colours. The surface of the bowls is created by using richly textured fabrics. The juxtaposition of the surface marks such as the weave or frayed edges or structural folds of deeply ribbed fabric create the composition. The edges are highly polished which highlights the colour and contrasts with the opacity of the textured glass. The deceptive simplicity of the design results in a beautiful centrepiece.