About Peter
Peter Layton has been at the forefront of British studio glass since the 1970s, contributing more than most to its promotion and burgeoning success. Peter dedicates his time to developing the skills of the next generation and for over more than 40 years, scores of talented glassmakers have worked under his tutelage. 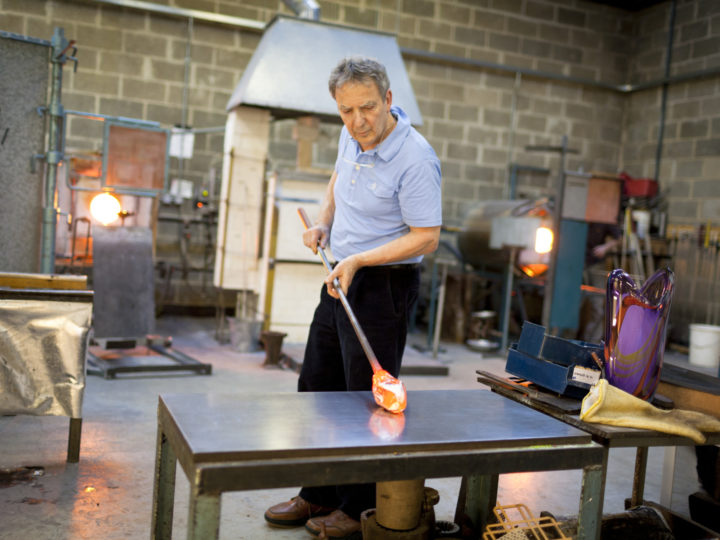 Such is Peter Layton’s contribution to glass art that it is difficult to know where to start; how to condense more than half a century of boundary-pushing, skill, bravery and expertise into a few words.

While Peter now operates from a cavernous studio in Bermondsey Street where visitors are invited to watch the glassmakers in action, his beginnings were far more humble.

The story begins in West Yorkshire, where his grandfather Victor Hecht, a Pathologist, took him to concerts and exhibitions and nurtured his interest in the Arts. At school in Bradford, his talents were first recognised and encouraged, and a spell of National Service was enough to stiffen his resolve to hurl himself into his love of art as soon as he returned. He first studied at Bradford Art College and then London’s Central School of Art and Design, specialising in ceramics.

On graduation in 1966, Peter was offered a job in the Ceramics Department at the University of Iowa. By chance, Harvey Littleton and a number of other potters were pioneering revolutionary new hot glass techniques at that time. Peter attended one of their early experimental workshops and was bewitched by the spontaneity of the process, the material’s medium’s immediacy and its vast potential as a contemporary art medium.

The spell has never been broken.

“Glass is magical and extraordinarily seductive,” explains Peter. “Every piece is a challenge and an adventure and you never know exactly what you have created until you open the annealing kiln and see how a piece has turned out. I love that moment of surprise.”

On his return from the USA in 1969 he established his own small glass studio at Morar in the Highlands of Scotland; a Glass Department at Hornsey College of Art (Middlesex University); and in 1976 the London Glassblowing Workshop in an old towage works on the Thames at Rotherhithe. Now based in thriving Bermondsey Street, Peter shows no signs of slowing down despite finding himself in his 80s.

Peter has three children, Bart, a BAFTA winning film maker, Sophie, an outstanding young printmaker and Ben, an aspiring writer and researcher with a television company. He is married to Ann, who now directs the studio and gallery.

Of course, it would be somewhat expected for Peter’s works to mellow with age, from angry and experimental to gentle and formulaic. Not so. Weapons of Mass Destruction, featured on TV, sparked headlines, as did a recent large installation called Memories – a wall of red poppies which paid a fitting tribute to those who have lost their lives in conflict.

Away from the furnace Peter’s life is just as frenetic. He has written several books, received an honorary Doctorate of Letters from the University of Bradford, become an Honorary Liveryman of the Worshipful Company of Glass Sellers, sat on the Board of the International Glass Art Society and been given the Freedom of the City of London.