About Edward
Edward Johnson designs and makes contemporary furniture. His creative approach allows him to think outside of the box and push the boundaries of his materials to the limit. It demands that he stays true to traditional methods, where he has worked tirelessly to hone his craftsmanship, specialist skills and technical knowledge - whilst striving to do so with an open mind and ambitious outlook. Edward describes his work as ‘being led by a core desire to challenge and innovate’. His designs are often conceptually based, but with form and function always at the fore.
Website 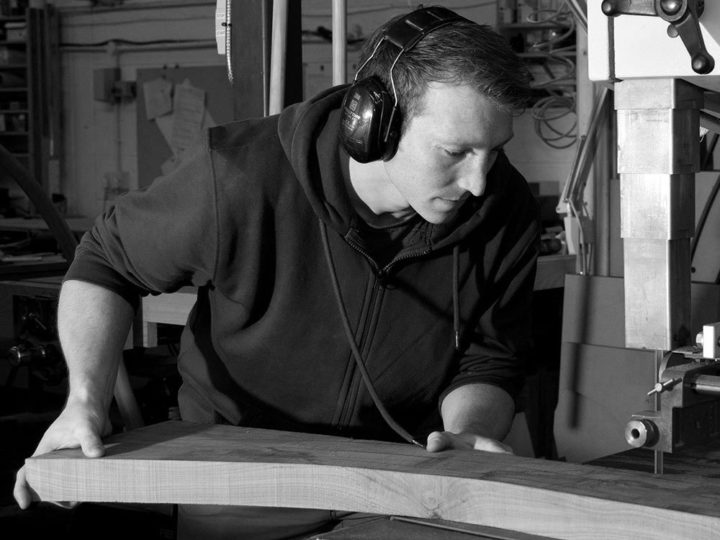 Edward Johnson established his business in 2009 after gaining invaluable experience working in the furniture design and manufacturing industry. He graduated in 2007 from Buckinghamshire Chilterns University with a first-class honours degree. Edward has since gone on to develop a deep understanding for his craft and now produces museum quality furniture for private and commercial clients.

Edward describes his work as ‘being led by a core desire to challenge and innovate’. His designs are often conceptually based, but with form and function always at the fore. Edward perceives both beauty and usefulness in equal parts when designing and developing his ideas into thought-provoking, fluid and tactile forms. One of his principal aims is to challenge our understanding of what is possible, which he achieves through creative aptitude and his mastered ability to engineer in wood.

The works in this gallery show selected pieces from three of Edward’s Signature Collections: Ripples, Freeform and Murano.

The Ripples Collection pushes the concept of laminating in a whole new direction. The principal intention was to create elegant, clean and fluid forms which allow the materials to provide the detail. Inspired by the action of a stone dropping into water, Edward wanted to give the illusion of concentric ripples engulfing the entire form; bringing movement, life and softness to the surfaces.

The Murano Collection was inspired by a visit to the island of Murano, Venice. Venetian master craftsmen have been producing glassware for centuries, by floating layers of different coloured glass through one another to produce exquisite patterns. The Murano Collection again stemmed from Edward’s interest and expertise in laminating. This time his aim was to develop an organic free-flowing form reminiscent of Venetian glass. To create this effect, hundreds of thin strips of wood are cut in Edward’s workshop and joined together using contrasting tones of timber, resulting in sweeping lines and curves that engulf the furniture, bringing a soft, organic surface to the angular forms. Edward sees this process as a way ‘to manipulate the grain of the wood as an artist would manipulate paint with a brush’.

The Freeform Collection pushes laminating to its limits in a very different way to the methods adopted for the Ripples and Murano Collection. The sweeping curved elements used in the construction are made from one continuous length of timber, using various moulding techniques to shape and manipulate the material. Each curved element is then finished by hand using various spoke-shaves, requiring outstanding craftsmanship and a keen eye for detail.

Commissions
Edward Johnson had been commissioned to design and make bespoke furniture for a range of clientele from private patrons, architects and interior designers. His work is held in many private collections.