About Jane
Jane has had a life-long interest and involvement with ceramics, after travelling extensively for many years in the Middle East, India and Africa. Initially qualifying in agriculture, she and her husband established an extensive farm business, on a remote valley farm in the Chilterns. After her family of 4 children gained independence she returned to full-time education, graduating with a degree in Ceramics & Glass. She was commissioned to write a book for the Ashmolean Museum in 2015, and has continued to build her reputation as a successful studio potter, specialising in pit-fired ceramics.
Website 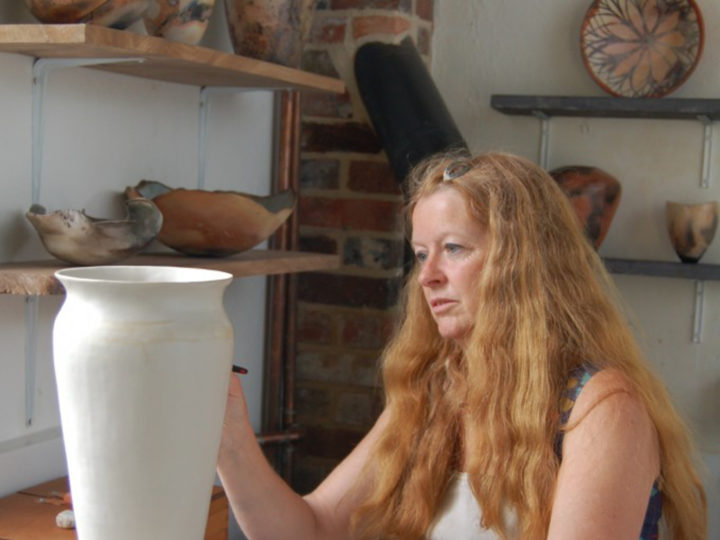 As soon as Jane discovered the process of pit firing she knew that it was a way of working that she strongly identified with, and felt that she had found her creative direction. She is excited by its endless possibilities, by the fact that the pieces seem to have been created by nature itself, by the organic material, the seaweed, and the element of fire, with its power to transform the surface of the clay into a myriad of different patterns and colours.

The technique is a marriage between the artist and chance, experimentation and observation, where discovery becomes as significant as invention, and failures should be seen as just part of the process of learning. Each piece that is unearthed from the ashes is totally unique and she is inspired and intrigued by the fact that the beauty of nature itself seems have been encapsulated into the work when the elements interact. Consequently she is constantly striving to create forms that mirror the simplicity and balance evident all around us in the natural world, so that surface and form become seamlessly unified, as in nature.

In her life Jane enjoys taking risks and chances, going on long journeys of discovery, and travelling to places where few people venture. By working in this way she is able to find the same challenges and adventure in her creative life, and hopes that her work conveys and retains the excitement and enthusiasm she feels when making it.

Fellow of the Society of Designer Craftsmen

2008 - to date - Established my studio with a grant from LEADER funding, part of the RDPE (Rural development programme for England). Started to work independently making pit-fired ceramics, and also teaching privately from my studio.

2008 – 2016 - On the committee of West Forest Potters and responsible for Speaker Bookings – 8 speakers/year.

1999 – 2000 - Artist in Residence, Watlington Primary School, Oxon Worked with all the children in the school to create a relief tile panel (8ft X 4ft) to mark 125 years of the school and the opening of a new school by the Education Secretary, David Blunkett, in the Millennium year.

1997 – 1999 - The Douglas Watson Studio, Henley-on-Thames. Worked in a team of 4 assisting in all aspects of running a busy tile making and hand-painting studio, selling to prestigious outlets such as ‘Paris Ceramics.’

November 2019 – Terracotta plant markers featured on the front cover of November's Country Living magazine, and also photos of them were featured 4 times inside the magazine.

September 2019 - to date – Work on show at Waterperry Gallery, Oxford

September 2016 – September 2018 Researching and writing for the book, ‘Alan Caiger-Smith and the Aldermaston Legacy.

February 2017 - Work was featured on The Great Pottery Throw Down for the ‘Perfect,Perfect’ section on the Pit-Firing Episode, and also showcased in photos in the accompanying book p.’s 96-100 with technical information which I provided.

September 2016 - Now teaching 2 days a week in the studio

January 21st – 24th 2015 - Love is Enough: William Morris and Andy Warhol. In collaboration with Modern Art Oxford – 4 days of ‘hands-on’ workshop sessions, where members of the public engage with clay to create simple but beautiful objects, reflecting Morris’s ideal that you must ‘Have nothing in your home that you do not know to be useful and believe to be beautiful.’ Also demonstrations of my workshop practice and a continuous showing of the film I made of the whole making and pit firing process, and a small exhibition of a selection of my work.

January 8th – 17th 2015 - The 25th Designer Crafts at The Mall Exhibition, The Mall Galleries, London SW1 – Exhibiting in the Main Gallery and in The Shop within the Show

October 4th – November 8th 2014 - ‘Fields and Flames.’ A solo ceramics exhibition, with photography based pictures by Seb Piper, and the opening exhibition at the Golden Hare Gallery, Ampthill, Beds

July 2013 Henley Festival of Music and Arts – The Riverside Gallery

June 2012 - ‘The Art of Craftsmanship’ Snowshill Manor, Gloucestershire (National Trust) A 2-day demonstration by selected members of the Society of Designer Craftsmen

September 2011 - Lecture and Demonstration to Buckinghamshire Pottery and Sculpture Society

December 2010 - ‘Raku and Beyond’, ‘Christmas at Bevere’, The Gallery at Bevere, Worcester

December 2008 - The Graduate Show, The Gallery at Bevere, Worcester