About Christine-Ann
Having trained at Harrow School of Art under Mick Casson, Christine-Ann’s interest in thrown porcelain led her to work for David Leach before founding her own workshop in London in 1975 where she specialised in monochrome and crackle glazes. The 1978 CPA trip to China consolidated the influence of the east on her ceramics. On her return she pursued Chinese studies and in 1984 received bursaries to allow her to return for more research. Her growing interest in Chinese calligraphy gave way to a more calligraphic vision of black and white pots with a splash of red enamel.
Website 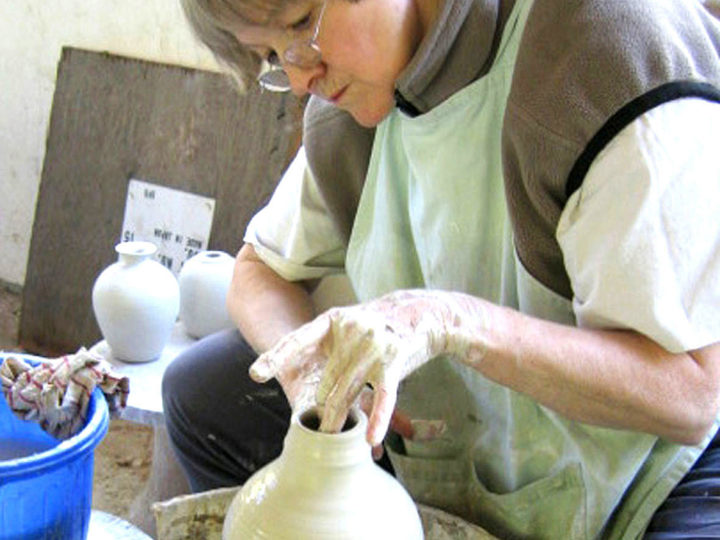 Attending a ceramics workshop in Tokoname in Japan in 1992 and beginning to work with a rougher clay led Christine-Ann to apply for a Winston Churchill Travelling Fellowship in 1996 to return to Japan to ‘look at the way water is used in landscape and architecture.’ The visit very much centred on the work of Shunmyo Masuno, a Zen Buddhist priest and landscape architect. This visit has been an ongoing source of inspiration for her larger bespoke, hand-built garden ceramics.

Now living and working in a Chapel near Frome in Somerset has enabled her to complete these larger projects. She has built her own segmented electric kiln which enables her to construct, by slab and coil method, her bespoke garden ceramics on the kiln shelf at the base and lower the sections over the ceramics when completed.

She finds the slower pace of constructing these hand-built pots, which may take her a fortnight to complete, more meditative than the immediate demands of throwing on an electric wheel.

Having been absent from the studio for a couple of years due to ill-health and having always been very precise and minimal in her thrown porcelain, Christine-Ann has recently found a greater freedom in her thrown work using not only her porcelain clays but also her rough hand-building clay bodies.

Over the decades Christine-Ann has exhibited her porcelain both in the UK and Europe and her larger works have been commissioned both privately and for public spaces.

Awards have covered both her research into early Chinese ceramics and Greater London and South West Arts Awards towards her own ceramics, including in 2009 the SDC Gane Award for Excellence in Craftsmanship and Design.

Since 1985 Christine-Ann has organised and accompanied others on visit to archaeological sites and craftsmen both in China and Central Asia. Tours are listed on her website.