About Maggie
A childhood spent on Yorkshire’s North Sea coast laid the foundations for a lifelong interest in marine life, skeletal remains, and palaeontology. Maggie’s hand-formed, carved and pierced works are the result of those close observations. Naked porcelain surfaces, and the carving's subtle shadowing reference the subject matter, but never copy what nature has already perfected. Stained porcelain, when used, is restrained. Her smallest pieces sit comfortably in the hand; reminders of beach-combing searches amongst the ever-changing high tide line’s time and salt-washed treasures. A lasting habit.
Website 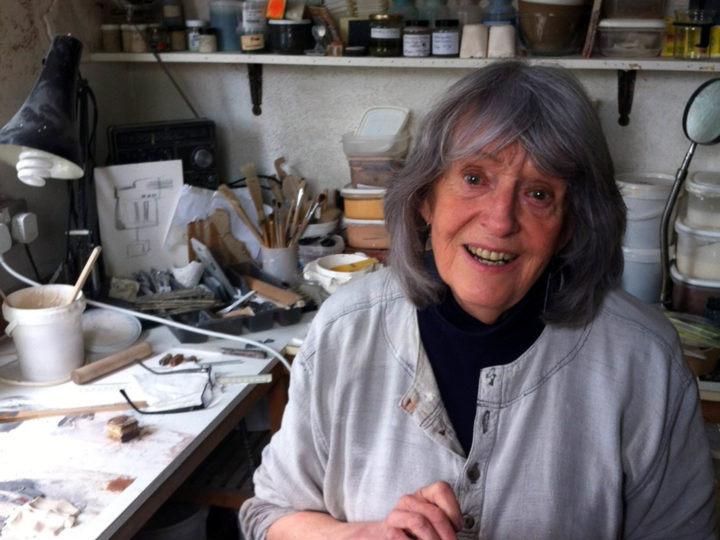 Maggie graduated from Harrogate College of Art & Design in 1979, was accepted into the Society as a Distinction Licentiate, and opened her studio workshop in 1980. The early years saw her exhibiting across the North of England, eventually in London, then further South. Her first solo exhibition opened in Germany in 1983 at the Galerie Böwig in Hanover. This was followed by an International Event at the larger Galerie Böwig in 1985 showcasing ceramic artists from across Central Europe, which presented her with offers to show in other Mainland European venues.

She continued to develop the carved and pierced porcelain, and in 1986 was accepted as a full member of the Society of Designer-Craftsmen. Her work was successfully exhibited in Continental venues, leading eventually to a series of residencies as Guest Colleague at the studio of Keramik-Meister Wendelin Stahl at Burg Coraidelstein in the Mosel Valley between 1987 and 1992.

It was during this intense period of development that Maggie created her Crater Bowl series, winning her a place in the Triennale de la Porcelaine in Switzerland and evidence of her continued interest in geology/fossil remains. Other items from this period were exhibited at the Keramikmuseum in Hohr-Grenzhausen, a historic centre of excellence close to Koblenz, and also in a joint show alongside Herr Stahl’s own porcelain in Cologne. Various examples of Maggie’s work remain in both public and private collections in Germany.

Professional connections and lasting friendships were established during those years. The variety of experiences broadened her creative thinking, informed practice development, and influenced future planning. Maggie’s collection of ceramics, acquired during the time spent travelling between the UK and Europe, was eventually shown privately to a group of interested collectors, and was enthusiastically received.

Encouraged by their response, she launched her European Ceramics Gallery in North Yorkshire in 1993. Her connections in mainland Europe ensured a steady supply of the very best of contemporary ceramics from across the North Sea. Henry Rothschild and Bill Ismay were both generous in their support of the venture, living links to an earlier time when Henry’s Primavera Gallery in London had supported and encouraged German refugees Lucie Rie, Hans Coper and Ruth Duckworth, who came here, found refuge, and ultimately changed the face of traditional British ceramics.

Maggie continued to collaborate with respected artists and galleries, returning eventually to full-time studio practice as a designer-maker and freelance consultant/advisor; her comprehensive professional history enabling her to offer private mentoring support.

The European connection continues to inform her critical view of contemporary studio ceramics; her aim being to encourage, strengthen, and sustain the quality standard of fine craft, and to promote the work of those whose practice illustrates and supports those ideals.

Maggie’s professional history is comprehensively documented on her website.