About Mary
Mary Penley trained as a graphic designer before working professionally as a staff scenic designer for BBC London for a number of years. During this time, she discovered clay and her love affair began. Mary has always loved pattern, surface decoration, and architectural forms. She is inspired constantly by nature, in particular the beauty surrounding her home and studio in Sussex. Her work is a combination of wheel thrown and hand building techniques. Clay also forms part of her ministry as a trained Spiritual Director for the Anglican Church, both within the UK and Europe.
Website 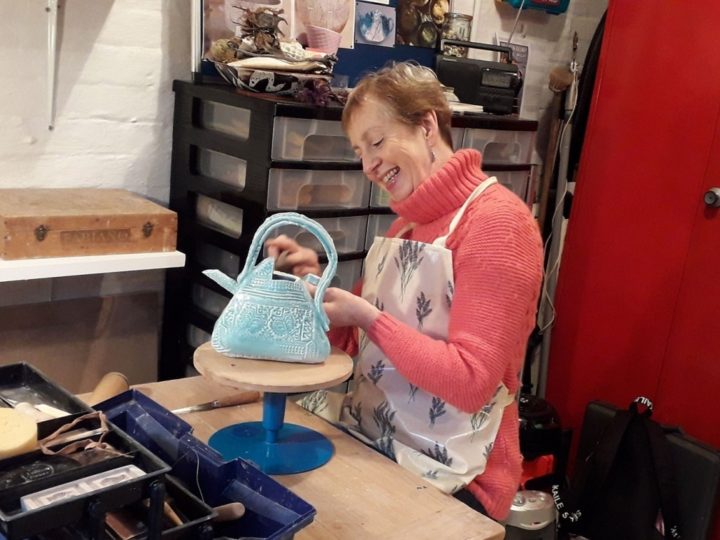 Mary studied in Manchester, and was introduced to clay while working as a scenic designer in broadcast television. Mies van der Rohe, Le Corbusier, Walter Gropius, founder of the Bauhaus movement, have all been influential in her work. For example the simple shape of the triangle she uses repeatedly. Theatre designers Adolphe Appia and Edward Gordon Craig. Founding members of the Arts and Crafts Movement, architect Hugh Baillie Scott, William Morris, William De Morgan, continue to provide inspiration. The interplay of light and shadow, of form and function, attention to detail, simplicity of line. Knowing what to leave out!

A former Creative Director and Corporate Events Manager, Mary enjoys the discipline and fun of making her triangular 'T' pots. These are press-moulded and handbuilt in a variety of clays. Either the clay is imprinted with a range of textured surfaces, or used as a canvas for slip decoration. Each piece is given a name and often assumes a character. They have been likened to fashion accessories and Mary sees them developing as 'collections' to be displayed on a catwalk!

The sculptural spheres Mary produces are organic in nature, and allow for a range of firing techniques, including smoke firing. She uses a range of materials including seaweed and pistachio shells. The oyster platters are inspired by shells collected from the beach. They are made from 'layers' of clay, imitating the way the oyster lays down its shell.

As a trained Spiritual Director, Mary accompanies people in an exploration of their faith journeys. Increasingly she is using clay in her ministry, as she remains fascinated by the therapeutic healing properties that clay has to connect with people at a deep level when used in a contemplative way. It can help focus on the present moment, relieve stress and help people unlock and acknowledge past experiences buried deep within. The pandemic has seen people having to face and explore their interior landscapes, often for the first time. The liturgical sculptural pieces Mary creates, are 'prayed' into being, similar to icon writing, through lived experience. These then become focal points for the 'Prayer through Clay' retreat workshops she leads for individuals and faith communities.

Resumé Back to top
Qualifications and membership