About Carol
Carol is a textile artist specialising in machine embroidery, creating unique one-off pieces for public and private venues. These range from small intimate framed works to large scale hangings. Her work has been represented in many group and solo exhibitions and she teaches and exhibits in the UK and abroad. As well as exhibitions, and work for galleries and private venues, her work has been commissioned and collected by public, corporate and private clients. She describes her work as walking through the landscape, from her home near the South Downs to France, Italy, Spain and other countries.
Website 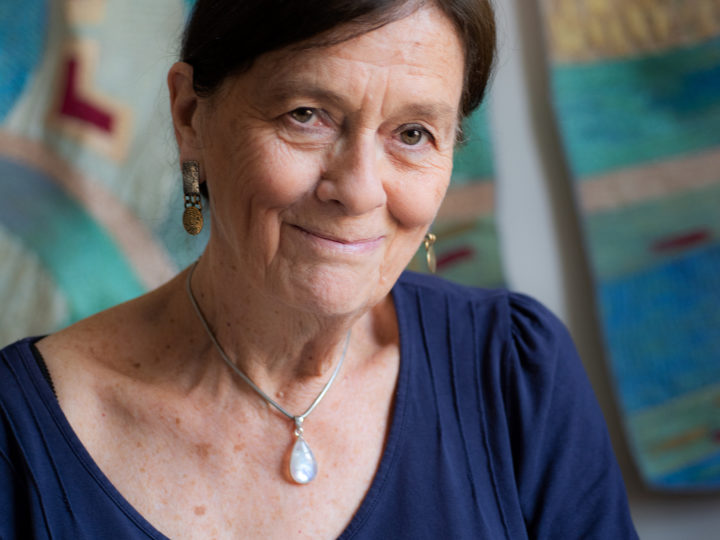 Carol studied at Goldsmiths School of Art where her passion for textiles was nurtured. In 1997 She left a successful career in lecturing as Head of Fine Art at Chichester University, in order to concentrate solely on her own work.

She stitches intensively onto painter’s canvas, or similar, using a variety of rayon, cotton, woollen, and metallic threads, building line upon line of colour and texture, looking at the changes in light and shade, mixing colours as a painter would. Each piece evolves as she works, and cannot be replicated.

Heavyweight threads in the spool are couched down in long, free lines from the back of her base fabric, as she draws with her machine. She then turns to the right side, redefining and adding finer details.

She works from personal experience and observation, and her own drawings. Sometimes a shape, or a memory can be enough to start a piece of work that in turn can lead to a series. Although she focuses mainly on landscape, she has recently begun a series of more abstract, richly stitched sea and skyscapes.

She says "I look, I draw, I select and I translate"

Carol has a BA Hons and Postgraduate Diploma in Textiles from Goldsmiths School of Art.

She exhibits extensively in the UK and has participated in exhibitions in USA, France, Spain, Italy, Ireland and Portugal. Her work is represented in many private collections worldwide.

Carol is a Fellow of the Society of Designer Craftsmen and was chairman for four years. She co- curated the annual winter exhibition at the Mall Galleries for 13 years, and also co curated Everyday Encounters for the Society at the William Morris Gallery, Walthamstow. She is an Hon Vice President of the Society.

She enjoys working to commission, and has work in several Hospital and Education Trusts in the UK. These include Broomfield Hospital, Essex, St Richards hospital, Chichester, Frimley Park Hospital, Surrey as well as several Education authorities including West Sussex, Kent and Leeds. Her most recent commission in 2021 was for a private client in the USA called "Blossom Trees".

In 2013 Carol received a silver award from British Craft and Design for excellence in textiles.

She teaches and lectures throughout the UK and has been a guest lecturer and teacher in the USA and New Zealand.


She has work published in many magazines, books and the press in the UK, USA, Australia, New Zealand, France, the Netherlands and Portugal, and has written articles on her own work as well as on other textile artists.

'Into the Light' Oxmarket Gallery with Society of Designer Craftsmen

'A Stitched Timeline' one person show at Sunbury Embroidery Gallery

'A Stitched Timeline' A one person show at the Knitting and Stitching Shows, Alexandra Palace, Dublin and Harrogate

'Capability Brown Festival' with the Embroiderers Guild, venues include NEC,

the Knitting and Stitching shows at Alexandra Palace, London, and Harrogate