About Sue
Sue Stone is a British artist based in Grimsby, who is best known for figurative, textural compositions that often feature a fish; a symbol of her heritage. Her work, which has an emphasis on hand embroidery often combined with machine stitch, appliqué and paint, has been exhibited widely in the Uk and Europe, and in Japan, Pakistan and the USA. As an experienced speaker and teacher Sue has delivered workshops to groups throughout the UK and in France, the USA and Canada. Sue has also devised and teaches 2 online hand stitch courses to students worldwide in conjunction with Textileartist.org.
Website 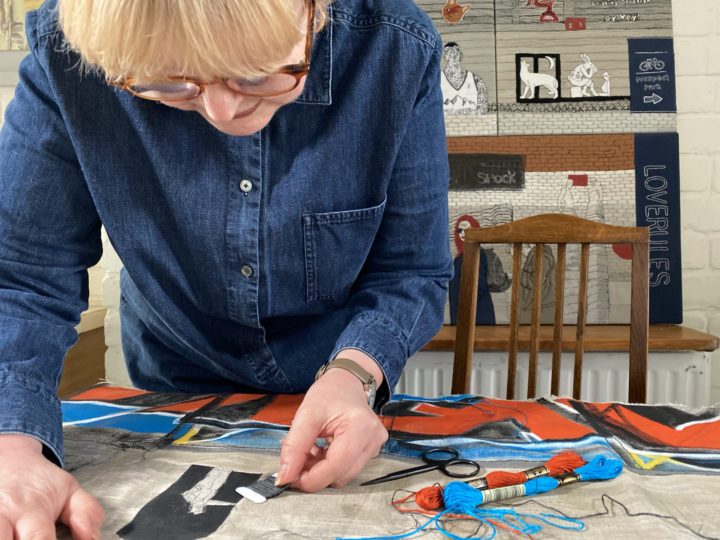 Sue Stone’s work is inspired by people, place and time. Her ideas are drawn from anywhere and everywhere; the seen, the heard, the experienced, her life observations and her Grimsby heritage.

Her practice is made up from several elements: documenting, processing, making, exhibiting, teaching, speaking. The embroidered work is often made in series. The Grimsby fishing industry, street art and graffiti, the family album, and most recently social history and collected memories have all played their part in inspiring these ongoing series of work.

Starting life on computer screen multiple images of people, place and time often interact with each other. The resulting compositions create the allusion of a journey through life. The techniques used during the making process are simple and straightforward. A deliberately limited vocabulary of hand embroidery stitches, is often combined with machine stitch, appliqué, sampling, and acrylic paint.

Festival of Quilts - NEC, Birmingham -10 -13 August - A Portrait - Group exhibition with Through Our Hands