About Dee
Dee is a contemporary textile artist who uses sketches, colour and texture to represent moments in time. The fabrics, stitches and images are carefully chosen to capture an emotion and offer a fleeting impression. Representational or abstract, drawing is always fundamental to her work.
Website 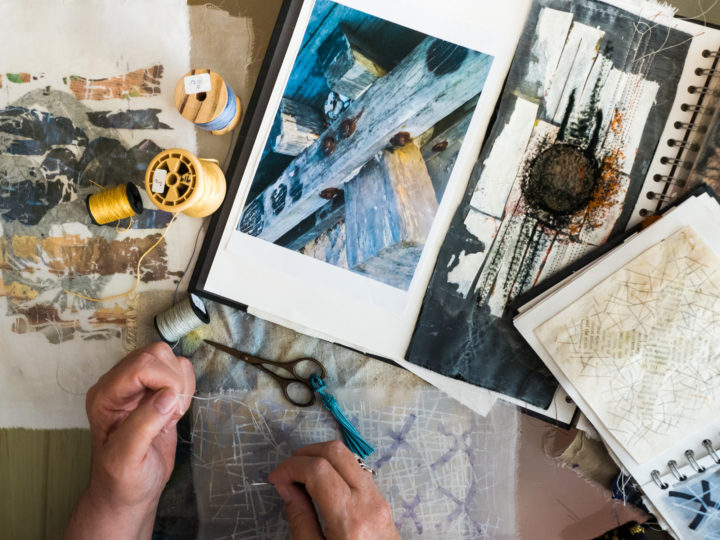 On leaving art school Dee spent many years working as a studio artist. Later a fortuitous introduction to embroidery reignited her love of textiles leading to her enrolment on a City and Guilds course where she was able to indulge her love of colour and texture. In 2006 she returned to college to take the HE diploma in stitched textiles.

The landscape provides the inspiration for most of Dee’s work and she is just as likely to concentrate on small details as the overall panorama. Her work is informed by visual research, which then evolves through a process of fragmentation and reconstruction. Printing, painting, patching and layering of fabrics forms a background for stitch, a style of working that reflects her interest in collage. Dee will happily combine paint and stitch or whatever medium seems appropriate to the work.

How to get started on a new piece of artwork-TextileArtist.org

Another View Prism at RBSA Birmingham May 2017

Dee exhibited in the Graduate Gallery at the Knitting and Stitching show in London and Harrogate in 1997, after completing her City and Guilds qualifications in embroidery (parts 1 and 2) taken in Windsor and Manchester.