About Dan
Dan is probably best known for her Knitted Chandeliers, though her intricate to atrium scale commissions include artwork for interiors, cruise liners, window displays, theatre and public art.
Website 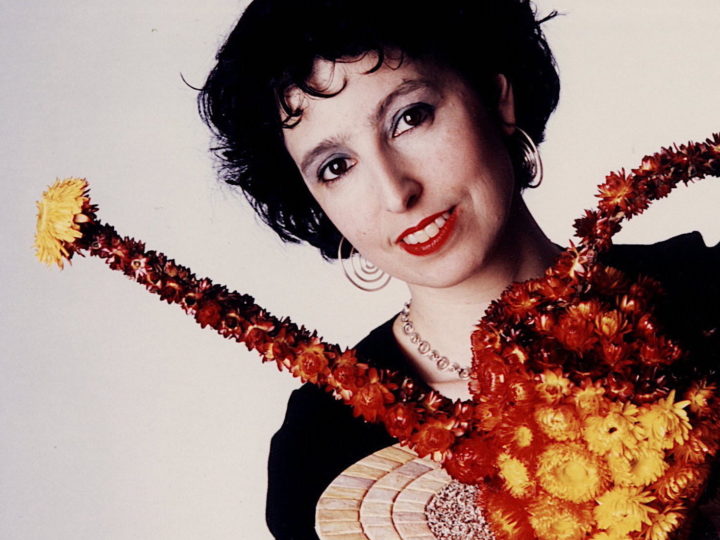 Dan has been making since she was old enough to hold a pair of scissors. She didn’t feel brave enough to do a sculpture degree, not believing (aged 19) that she was a fine artist, so opted to study Textiles at Central St Martins. However, it became clear that her internal desire to create three dimensional forms was irrepressible and the result has been a journey from knitted sculptures to lighting design and beyond. She has delivered an incredible variety of commissions from atrium scale to intricate pieces, all of which she relishes.

A Christmas window commission for Wallis in 1993 led Dan to develop these textile sculptures as light-shades and so her Knitted Chandeliers were born. First clients included Harvey Nichols and Liberty with John Lewis, Heals and Purves & Purves following, along with numerous stores around the world. This design swiftly achieved both national and international press acclaim, starting a revolution in contemporary lighting design. Both quirky and classic, the Knitted Chandelier seems to evoke an uncanny loyalty from customers who continue to return over 25 years later. Several of Dan’s designs were best-sellers and over time, retailers were commissioning exclusive designs and Dan became adept at working to tight briefs and budgets and streamlining production, with the majority of designs still being hand made. This journey led her to explore a wide variety of materials and processes which she continues to draw on for her commissioned work, ever rising to the challenge. She sculpts paper and acetate, uses machine embroidery, appliqué and wire and is a keen up-cycler, minimising waste in all she creates.

Always up for designing a show-stopper, Dan prides herself on a meticulous and pragmatic approach. She has a reputation for innovation, high quality, reliability and integrity.

Dan has been invited to give lectures and workshops all over the UK and abroad including at the following institutions: