About Debbie
Debbie Lyddon is a textile artist and maker. Her work explores landscape and place and her inspiration comes from experiencing and paying attention to her surroundings. Debbie’s practice combines traditional stitch techniques with non-traditional materials such as bitumen, salt and wax to make ambiguous 2-D and 3-D works that evoke the sights, sounds and touch of coastal environments. Debbie has an MA in Contemporary Textiles from the University of Hertfordshire and is a member of the 62 Group of Textile Artists, Studio 21 and the Society of Designer Craftsmen. 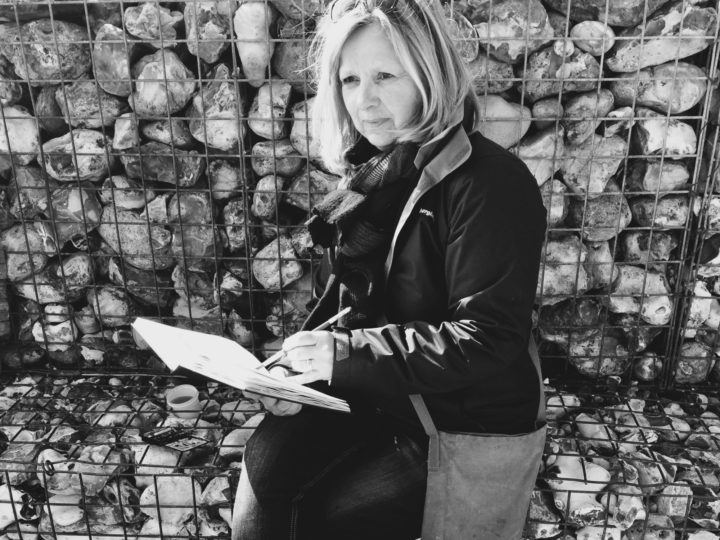 Debbie’s interest lies in how we perceive natural phenomena – air, wind, water, light and sound – in the environment. Her inspiration comes from walking, noticing and collecting. As an artist and a musician her work is not only inspired by things that can be seen but also by things that can be heard and touched. Debbie’s current practice explores coastal locations and the processes of change that are engendered on the landscape and the objects in it.

Cloth and traditional utilitarian hand-stitching are the foundation of Debbie’s work. Cloth is found in coastal environments in the form of tarpaulins, boat covers and sails and she alludes to their functional purpose in her work. The materials that she uses in conjunction with cloth – salt, bitumen, wax, varnish – are substances that are found in a coastal location and they play an integral part in relating the cloth objects to their surroundings.

Debbie’s practice aims to evoke a multi-sensory interpretation of her surroundings to promote an awareness of the relationship between the visual, aural and tactile landscape.

City and Guilds, Part I and II – Creative Studies, Embroidery

Debbie runs workshops, give talks and offer mentoring to groups, clubs and schools.

Her work can be seen in:

Member of the Society of Designer Craftsmen

2016 Moments of Being, The Knitting & Stitching Shows, London and Harrogate