About Diana
Designer/maker of wall panels, hangings, pictures, carpets, screens, altar frontals and greeting cards. Work is mainly to commission and produced in all types of cloth and yarn. Individuality of design stemming from a fine art training in drawing and painting. Versatility of subject spanning the figurative, descriptive and representational to the abstract and conceptual. Liveryman of the Worshipful Company of Broderers
Website 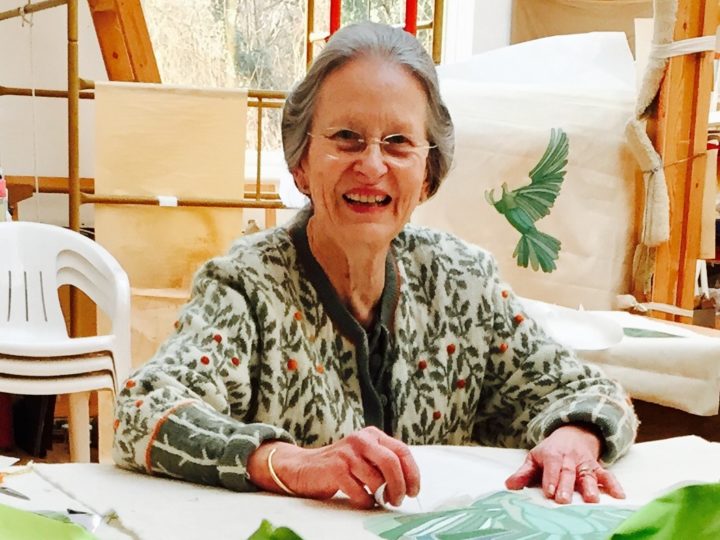 Diana's personal creative work has always been in response to a client brief - always responding to something that someone actaully needs. Diana makes work for exhibitions when invited but again driven by a theme.

1968 Diploma in History of Art, University of London

Chairman 1987-90 and Fellow of The Society of Designer Craftsmen

1984 Elected Fellow of The Royal Society of Arts

2017 Elected Ambassador for The Textile Society

2018 received the Freedom of the City of London

2019 Elected Liveryman of The Worshipful Company of Broderers

1968-1980 Principal Lecturer & Head of Department of Fashion & Textiles, Stockwell College of Education, Bromley (until its closure)

1980 to the present – Numerous Freelance Teaching & Lecturing commitments including

2017 Numerous invitations to speak on the subject of Contemporary Embroidery including TV appearance June 2016 BBC4 Craft: Made Britain

2008/9 An Embroiderers’ Eye, catalogue and exhibition for Macclesfield Museum

1988 Panel for Library, University of Sheffield

1997-99 Winner of Lottery funded competition to Design & Tutor an embroidery community project to celebrate the millennium in Dunsfold, Surrey

2000 Designer of seven embroidered panels, Hospice in the Weald, Kent

2012 Design for Altar Frontal Trottiscliffe, Kent to include group tuition to undertake embroidery

Life Member of The Embroiderers' Guild

Life Member of the V&A

Life-time Friend of the RA

1985 Nominated for first annual Worshipful Company of Broderers Prize “ for professionalism, generosity, dedicated service and tireless leadership in raising the Embroiderers’ Guild to its present status”