About Darren
Darren trained in textiles specialising in hand knit. He taught himself machine embroidery whilst teaching art and textiles in secondary and further education. His work combines his love of the rich visual qualities of fabric with the line drawing potential of the sewing machine. The images he produces are further embellished with decorative stitches, beads and sequins. His current work is largely inspired by the stylised photographs used to illustrate knitting patterns in 1940’s Stitchcraft magazines. Darren undertakes commissions responding to personal photographs and histories.
Website 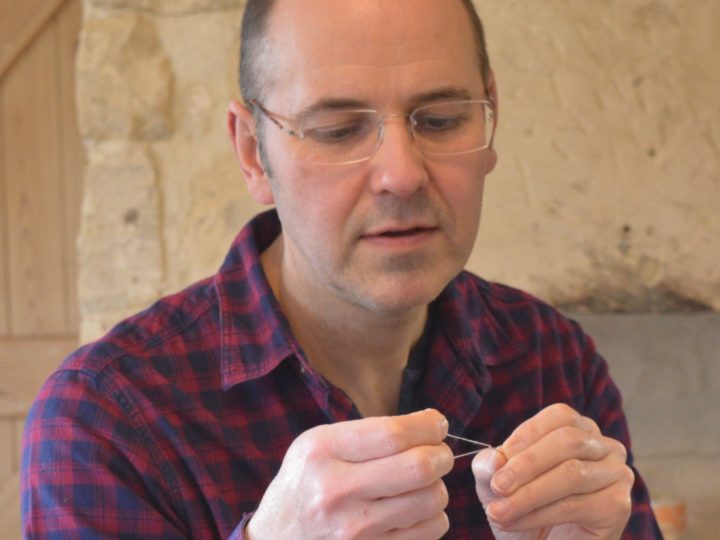 Darren graduated with a BA Hons in Fashion Textiles from Middlesex Polytechnic in 1990 and followed this with an MA in Textile Culture from Norwich School of Art. Since then he has taught art and textiles at all levels of education. Whilst teaching he has developed his own embroidery practice as a designer maker, moving away from knitting to explore the potential of image making and drawing using the sewing machine.

An unexpected link to knitting came with the gift of some 1940’s Stitchcraft magazines. These magazines provide the photographs that he uses as starting points in his work. His interest comes from their stereotypical representation of men and women, their gentle humour, their stylised poses and the beauty of the fashions of the period. He feels that it is appropriate that he should be interpreting these images through stitch as the magazines provided a creative textile outlet for women during the period. He uses both vintage and recycled materials in the making of his work which is in step with the ‘Make Do and Mend’ ethos of the era.

As his practice has developed he has extended his work through considering possible narratives for his characters and by refining his use of fabrics to create more visually rich pieces. He has also broadened his work through taking on commissions to interpret personal photographs and histories.

Darren’s finished work is framed and glazed to present it crisply and cleanly to emphasise its graphic quality and because he is more interested in the visual rather than the tactile qualities of the fabrics used.

As a member of the Sussex Guild of Craftsmen Darren has exhibited at many of their shows throughout Sussex. He has also exhibited in Surrey, Brighton and West Dean, and at specialist textile fairs in London.

Resumé Back to top
Professional Memberships

2017 Member of Society of Designer Craftsmen

2015 Member of The Sussex Guild

2018 Hand of the Maker, Society of Designer Craftsmen, Chelsea College of Arts, London