About Julie
Julie started her career in art later in life. After her sons had started school and Julie had worked for 20 years as a midwife, she commenced a Creative Arts Degree at Bath Spa University. With a love for drawing, but inhibited by preconceived ideas, Julie began using her sewing machine to make work that couldn't be corrected and where errors were allowed to become part of the work. Free machine embroidery became her chosen medium and today she continually tries to push the boundaries of stitch.
Website 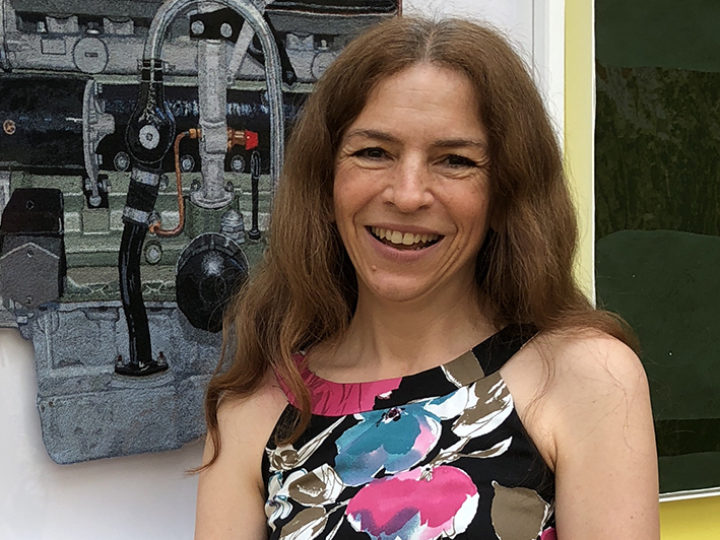 The inspiration for Julie's practice happened following a family tragedy when she had to rebuild a new life for her sons and herself. Art became a way to make sense of a world that Julie had unintentionally become part of. Difficult emotions were explored and control became important, but through her art, she soon discovered that the greatest strength and beauty could come from the things that went wrong.

With meticulous attention to detail, thread can be obsessively stitched over and over; colours are changed and tensions are altered to create the perfect image. Dissolvable fabric forms the base of her work but during the final stage, this is removed. It is here that the intense effort used to control the making can become lost; nothing is guaranteed as the work takes its own direction, it is this that excites Julie and encourages her to make her art.

Today, Julie continues to be inspired by themes that are unexpected in embroidery. Damaged or unloved, banal or unnoticed, are transformed through the process of stitch.

Gloucester and Cheltenham College, City and Guilds, Level 3 in Design and Constructed Textiles

2015 - Selected for Graduate Showcase, by the Embroiderers Guild.

August 2016 - ‘A Bar of Drinking Chocolate’ purchased for the ‘Diana Springall Embroidery Collection’.

July 2016 - National Centre for Craft and Design, Sleaford. Workshop, ‘Make a Shift Dress in a Day’.

2009 to 2016 - Art in Action, Waterperry Gardens, Oxford. During this annual celebration, artists and craftsmen practice openly demonstrating their skills and discussing their work. Since 2009, I have participated in this event by teaching Silk Painting and Marbling in the Practical Classes.